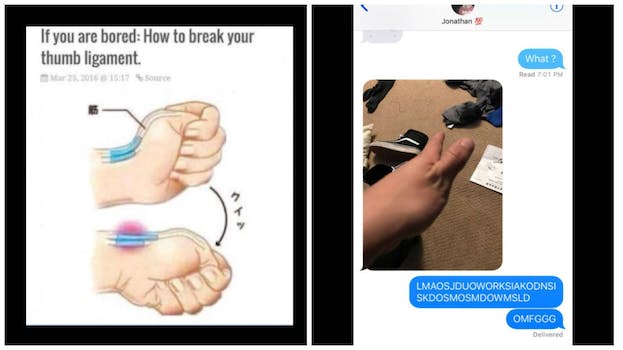 Teens are so bored, they’re using this guide to try to break their own thumbs

Teens really will try anything once.

No group of humans is more willing to inflict self-harm for utterly inconsequential reasons than teenagers (see the #FightingAirChallenge and #BackpackChallenge). Tell them to take a hammer to their kneecaps, and they shrug and say “why not?”

Now, teens across the web are trying to break their own thumbs, all thanks to one dude and his friend.

In fact, it’s pretty much impossible to break your thumb by tucking it into your fingers and shaking your fist. Try it a hundred times. There’s no truth to it. The image comes from a medical diagram showing how to diagnose tendinitis, but it was repurposed into a 9gag meme last year with the fake thumb-breaking instructions at the top.

That hasn’t stopped teens on Twitter from claiming they’ve broken their own thumbs giving this a try.

Just look at these tweets. Whether they are from double-jointed teens playing along with the prank, or kids pretending because they thought it was real and couldn’t get it to work themselves, who knows? It’s too hard to tell the difference with kids these days.

But they all tried to see if they could do it.

did i do it right pic.twitter.com/SRwh8jzECq

lmao idk if its because my thumb is already double jointed ( sorry for my chipped nail polish) pic.twitter.com/DJ2jRHF1ri

this don't even work OoP pic.twitter.com/Z4I70eiJ1j

CAM JUST BROKE HIS THUMB OVER A TWEET pic.twitter.com/67TxVUoBfO

Although no one really got hurt doing this, the explosion of the meme, which racked up over 70,000 retweets, left its creator exasperated.

If one more person mentions me with a fucking broken thump pic I swear to god !?&?&!)&!

If you can’t stand the tweet, don’t start the meme.