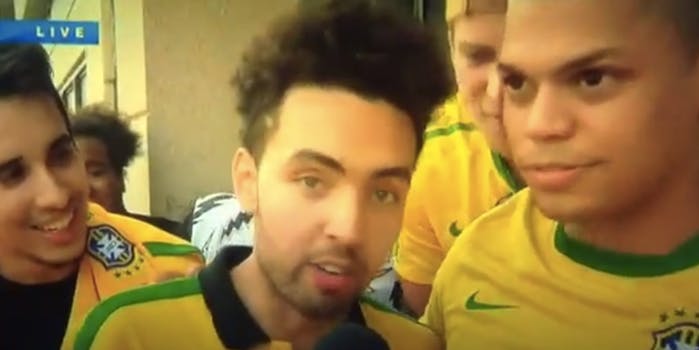 Someone get this guy a TV deal (but probably keep the FCC on standby).

When Brazil beat Chile on penalty kicks in a squeaker of a 1-1 match on Saturday, thus moving the national team through to the quarter finals, pretty much everyone was excited. But no one was as excited as this inebriated Canadian gentleman, who gave a hilariously NSFW response to a Toronto journalist’s questions on CityNews.

Here’s the video (the man’s remark is at about 0:19), which appears to have been inspired by this fake news blooper that was making the rounds a while back:

Did he just say that? Yeah, he totally just said that.

Undeterred by the man’s NSFW outburst, reporter Natalie Duddridge soldiered on, telling viewers to “disregard” the comment and saying “things are getting a little bit wild here,” before moving on to interview another Brazil fan. But the damage had already been done: as of now, the video has more than 406,000 views. Someone get this guy a TV deal (but probably keep the FCC on standby).