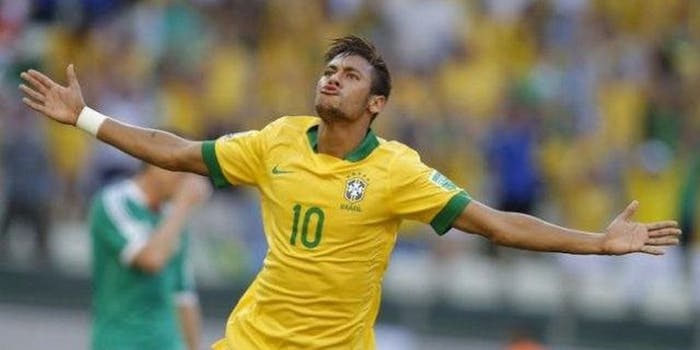 The speed was breakneck; it was like watching two Jeeps rumble down a mountainside.

Belo Horizonte hosted one of the greatest round of 16 games ever played in a World Cup on Saturday afternoon. The first knockout game of the tournament required 120 minutes of on-field gaming, and a series of razor-margin crossbar kicks for Brazil to best Chile 3-2 on penalty kicks.

Just before the end of extra time, Italian Serie A club Cagliari’s Maurilio Pinilla almost severed the psyche of Brazilians with a rocket tap that howled past keeper Julio Cesar and kissed the crossbar. The afternoon, after elite gamesmanship kept the score at 1-1 through regulation, finally found a scapegoat. Minutes later, Pinilla telegraphed his kick to Cesar’s gloves on Chile’s opening penalty kick, and Brazil rode out the storm.

The host nation opened up the scoreline with a crowded, set piece chip in score in the 18th minute. David Luiz’s height and low post body placement made the difference.

Barcelona’s Alexis Sanchez has scored 10 times in his last 14 appearances for Chile, including a cool, almost through pass-like half-strike past Brazilian keeper Julio Cesar in the 32nd minute.

The speed was breakneck; it was like watching two Jeeps rumble down a mountainside. Univision’s Spanish-language broadcasting team called it “barrio ball” in the first half. The term overlooked the world class talent in play.

#CHI scored with their first shot on target against #BRA https://t.co/zpOxE9t71a pic.twitter.com/B6ENzyYwSa

This is an exhilarating game of football played at a breathtaking pace in the most unbelievable atmosphere. Love it!

Pregame, the Brazilian anthem’s canned music ended and the scene turned into an uproarious crowd singalong.

The 1-1 draw held through the second half, where a Hulk handball in the 54th minute and a missed cross to Jo in the 74th served as two botched chances that cast doubt on Brazil’s ability to finish the job. When the crowd starts second-guessing the cause, homefield advantage becomes just the opposite.

Neymar answered the call and netted the winning penalty kick, while Sanchez overthought his shot and found only Cesar’s gloves.

Brazil will play the winner of Uruguay and Colombia in the quarterfinals.

Photo via Calcio Streaming/Flickr (CC BY 2.0)