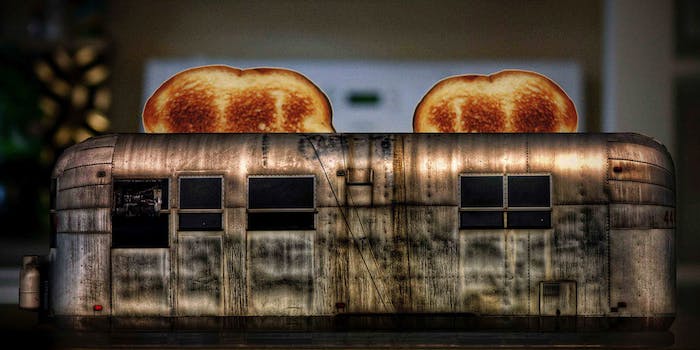 How ‘The Brave Little Toaster’ predicted our robot future

If you were born in the 1980s, there’s a good chance you had your childhood scarred by The Brave Little Toaster. The 1987 animated feature about a group of sentient appliances in search of their long lost owner is at turns saccharine and terrifying.

In one particularly memorable scene, the titular toaster has a nightmare involving killer clowns and being suspended over a bathtub with a faceless victim below him. An air conditioner kills itself, a lamp has a near-death experience, anthropomorphic cars sing dirges while being crushed to death. It’s a twisted film.

Looking back on it now, however, with more than 17 years of technological development between us and these magical gadgets, and The Brave Little Toaster is actually a rather prescient film. Far from being a simple oddity of children’s animation, the film (and the 1986 short story that inspired it) actually stands as an insightful vision of our own onslaught of smart appliances, the Internet of Things, and the personification of our own machines.

Far from the fluff of much children’s literature, the original 1986 picture book by the poet and artist Thomas M. Disch was noted as telling a story more complex than the preschool audience it appeared to be after. Characters quote Karl Marx and compose their own vignettes. In its official book review, the New York Times called it “a wonderful book for a certain sort of eccentric adult.” The NYT‘s Anna Quindlen continued, “You know who you are. Buy it for your children; read it yourself.”

The film adaptation’s existence on its own is rather daring. Released by Hyperion Studios, an independent studio founded by canned Disney employees, it became a runaway hit despite being a direct-to-video release not from the major studios of the time. The film features Deanna Oliver as the Toaster, Jon Lovitz as the lively Radio, Tim Stack as Lampy the lamp, unknown Tim Day as the insecure Blankie, and Thurl Ravencroft (better known as Tony the Tiger or The Jolly Green Giant) as Kirby, the grumpy, angry vacuum cleaner.

This may not be the typical setup for a classic of science-fiction, but the film is actually surprising in its emotional depth and its understanding of our relationship with technology. This cast from 1987 gives life to devices we’re constantly attempting to make more capable today.

Here’s Holi, a smart lamp that can change colors, moods, and sounds all from your smartphone. Much like Radio the character, apps like iHeartRadio can flip through stations to find whatever may be perfect for the moment and tone. How about a smart electric blanket with an automatic thermostat and temperature memory? Smart vacuum cleaners like the Roomba have been on the market for years.

And toasters? Toasters may be the smartest appliance of them all. We have toasters that let you pick the exact shade of brown you prefer from your toast. Last year, a Pittsburgh man wired his toaster to tweet from @mytoaster, cycling between the binary states of “Toasting” and “Done Toasting” accordingly. Perhaps most impressive is Brad. Brad is a (conceptual) toaster that, if used too infrequently, will list itself online for sale to find a home that will appreciate it.

Brad would fit right in with the fantastical world of TBLT, where home appliances find themselves only appreciated as far as their usability. Once broken, abandoned, or out-of-date, they become subject to dismay, ill-repair, and oblivion.

The movie begins with the characters alone in an abandoned lodge, constantly awaiting the return of “The Master,” a young child who used to play with them. When the air conditioner (voiced by Phil Hartman doing his best Jack Nicholson) challenges the utopian faith to the long-gone “Master,” they retort that the boy could never reach the A/C unit all the way up in the window.

What follows is the film’s first ethical clue to larger issues in technology. In an ego-driven rage, the A/C screams and slams the wall that binds it, hollering, “I’m not an invalid! I was designed to be stuck in this wall… It’s my function!”

While a suicide in the film’s opening scene might seem harsh for a kid flick, TBLT is actually hinting at a conversation AI theorists have been debating for decades: Would designing a sentient being to operate with a singular “function” be a form of enslavement?

A 2006 report commissioned by the U.K. Office of Science & Innovation says yes. Because AI on the level of this animated air conditioner would function as a sentient—if immobile—being, the report thinks robots (which don’t necessarily have to be humanoid) could demand rights to health care, voting, and may even be obligated to pay taxes and register for military drafts. One could think they might also demand not to be stuck in a window.

Of course, most of the characters are dependent on serving their “Master,” possessing what futurists call “friendly AI.” Because of the many dangers and ethical issues presented by the idea of artificial intelligence (or even artificial superintelligence), many scientists propose only the building of AI hardwired to serve mankind.

“Basically,” writes philosopher Nick Bostrom, “we should assume that a ‘superintelligence’ would be able to achieve whatever goals it has. Therefore, it is extremely important that the goals we endow it with, and its entire motivation system, is ‘human friendly.’”

If your priority, for example, is to read by the light of your lamp, it’s probably best the lamp share that priority. If not, AI theorists warn a superintelligent lamp could possibly rearrange all the molecules in the galaxy into a massive supercomputer meant to solve the lamp’s priorities (whatever they may be), obliterating you, me, and everything we know. Of course, it’s ludicrous to make something as simple as a programmable lamp into the first steps of Skynet.

Or is it? Much like our scruffy group of gadgets out on their way to find their “Master,” the appliances of this new machine age communicate and work together to accomplish their human-oriented goals. Commonly referred to as “the Internet of Things” (IoT), the connection between Internet-enabled objects (everything from heart monitors to smart thermostats like Nest) is only expected to grow for the foreseeable future. A study by research firm Gartner predicts there will be 26 billion gizmos on the IoT by 2020.

Home automation systems will be a large part of this infrastructure—and it’s just about here. The aforementioned Nest thermostat can control energy use, internal temperature, and security systems of a fully-installed home. Such apps as IFTTT (If This Then That) are looking to be the translator between all your programs and devices, amongst those WeMo light and motion sensors and Nest itself.

Such technologies will allow for a future of machines talking to one another, something the Department of Transportation already expects of new cars—even those that still have drivers!

Similarly, TBLT is a story about intelligent machines working together to accomplish the goals of humans. Our heroes—powered by a car battery and pulled along by Kirby—leave the lodge in search for their master. Along the way, they encounter long broken appliances in a repair shop. In a song number befitting a Vincent Price feature, they all extoll the evils of becoming outdated or broken lest they be twisted and malformed by the evil repairman.

This is a pretty astonishing moment in the movie: The same humans all these machines serve will also trash them, crush them, or simply screw with them. The broken machines our gang confronts aren’t endangering the main characters—they’re warning them of the dangers of man. In fact, the only machine threat in the film comes in the form of an industrial magnet loading cars (themselves decrepit and abandoned) onto a crusher, and even it is only serving man.

There is an actual, serious, non-fictional concern of machines losing sight of humans as a priority. Take, for example, the driverless car. It is inevitable these machines will have to choose between saving the life of the driver over that of pedestrians or passengers in other vehicles, meaning we must let machines decide who lives and who dies. How do we program such a complex code of morality?

Eliezer Yudlowsky, a fellow with the Machine Intelligence Research Institute, developed the concept of Coherent Extrapolated Volition (CEV) to show how AI must be programmed to avoid machines like those in TBLT making immoral choices.

How CEV works is fairly simple. It assumes that programming an objective morality into any machine will be subject to the biases of the programmer doing it. What Yudlowsky proposes is designing a separate AI that studies human behavior, developing the terms of morality most accepted within a society. This AI would then build other AI using the ideals of morality it has witnessed.

It’s pretty scary stuff. The AI of The Brave Little Toaster is hopelessly devoted to serving mankind. “Master is a man with a plan I can understand!” sings Lampy in the first big musical number. “Master is a man of great reflection!” praises Toaster. Their faith is rewarded when the Master—now a college student—saves the crew from being felled the crusher.

Every aim of AI studies and tech manufacturers is to make devices with similar faith yet with exponential intelligence, meaning we could each end up with a small cult of connected gadgets with each user as their god.

I’ll be the first to admit this is a bit much to take from a children’s film about talking appliances. But within this simple narrative lie some very real truths about our relationship with technology. The issues talked about here are the ethical debates not just of the future but of right now. Alongside how technology is used by humans for good or for evil, we must decide upon our relationship with the devices themselves sooner rather than later.

Your toaster is not out to kill you quite yet, nor is it ready to sing musical numbers in your honor. But as our technology becomes closer to enveloping our cars, homes, and even our own bodies, it is simultaneously growing more and more intelligent. We have to do more than just hope they will be as allegiant to their masters as Kirby, Lampy, Blankie, Radio, and Toaster.

Photo via janmaklak/Flickr (CC BY 2.0)