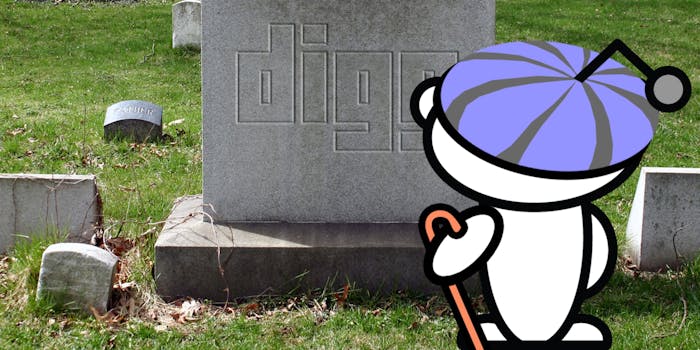 Is the powerful community perhaps getting too big? Some Redditors worry that the Reddit they know and love may be disappearing.

A social media website gains massive popularity amongst teens and twentysomethings based on “upvoting” news stories, Web comics, and other online miscellanea. As the site makes the front pages of the news, the user base grows at an exponential rate, leading to a selloff to a major media company. Sound familiar?

I am, of course, talking about Digg. Digg is largely considered the predecessor to the now-dominant Reddit as a massive driver of traffic and the non-chan hub of Internet culture. By 2008, Digg had gone through the typical website induction ceremonies: underground success, DDoS attacks, pissing off their own user base and leading to a massive revolt, requiring them to take a stance against the god-like MPAA. Y’know. The usual.

But in 2010, with traffic slipping and users flocking to Reddit and Twitter, Digg unveiled Digg 4.0, a massive overhaul including new servers, new databases, and a new design to their voting system. The new look not only failed to gain new users but actually costs Digg most of its user base, with some even flooding Digg with posts to rival Reddit. CEO and founder Kevin Rose left shortly thereafter, presumably to spend more time upvoting his family. 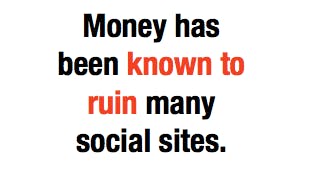 So what happened? As Reddit co-founder Alexis Ohanian said in an open letter to Rose, “this new version of Digg reeks of VC [Venture Capitalist] meddling.” Ohanian stated that it is “a damned shame to see digg just re-implementing features from other websites. But I’ve got a strong feeling it’s not you making these decisions anymore; and to see your baby abused like this must be awful.”

Money has been known to ruin many social sites. The crowning jewel is, of course, Myspace, which suffered massive user flight after its selloff to NewsCorp and its failure to keep up with new kid on the block, Facebook. But as Ohanian states in his letter, Reddit’s parent company Conde Nast has mostly avoided such pressures for followers or ad revenue.

So what could cause the new reigning king, Reddit, to meet the same fate as Digg?

As Reddit grows every year (with male teens being the biggest addition to that audience), many corners of the community fear the growth could be the beginning of the end—at least of Reddit as they know it. 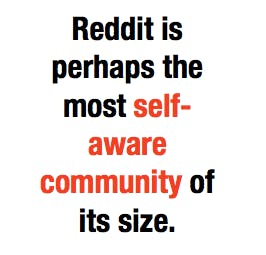 The comparison is fair on many levels. Not only is the user base of Reddit largely similar to that of Digg at its 2008 peak, but they are very similar in mission. What do people want? Let the people decide!

Reddit is perhaps the most self-aware online community of its size. r/TheoryofReddit offers users the chance to debate the very nature of the site itself. r/circlejerk is a far more sophomoric bored where the idiosyncrasies of Reddit are both mocked and hailed as unique artifacts of their own culture and making. Over the last year or two, many subreddits have been dedicated solely to bringing back what many see as the more distinguished, intelligent Reddit of yore, with labels such as r/TrueReddit and r/TrueAskReddit.

All through these boards run the same complaint: things ain’t what they used to be. As the site grows, the front page of Reddit with the default subreddits is littered with Advice Animals, liberal news, and the same atheism jokes you’ve heard a thousand times (although the r/atheism subreddit recently banned image posts, causing a small rebellion). But Reddit is what you make it. No subreddit is mandatory for a user, and new subreddits are created every day, often with increasingly specific purposes. There’s r/BirdsBeingDicks, r/AvocadosGoneWild, and even r/StopGirl, composed entirely of a single GIF of a girl shouting “Stop”. There’s also subreddits on cooking, smoking cessation, the culture of Australia, and the Carolina Panthers NFL team. 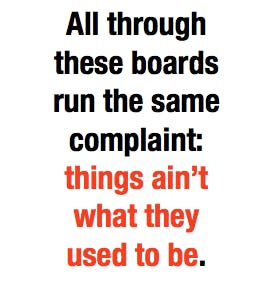 So to make a comparison many Redditors might find frustrating, aren’t those decrying Reddit’s newfound identity—a catchall primarily run by teenagers—similar to people complaining about cursing on television? If you don’t like it, change the station.

To their credit, though, Reddit is often seen as a single entity. Even on this website, media entities tend to refer less to “Reddit users” or “users on r/AdviceAnimals” rather than simply, “Reddit.” While this can help the site when its users are helping tornado victims (like in the above example), as the population grows, so do the problems.

Much like any social movement, any attempt to “fix” Reddit of its Actual Advice Mallard ills must come from the social base itself. The default subs on Reddit are not aimlessly dictated by the administrators; they are, in fact, the most popular subreddits. Unlike Facebook users—who have very little say in the future of the website (one reason amongst many the online commentariat is considering the end of Facebook)—Reddit is essentially a crowd-sourced mission. But as “original users” grow up and teenagers discover the site in droves, there is a micro-generational shift away from the oldheads and techies who popularized the site and into the sophomoric den of mass popularity. 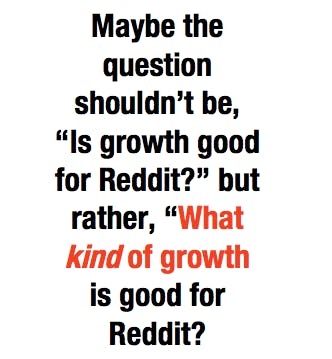 Maybe the question shouldn’t be, “Is growth good for Reddit?” but rather, “What kind of growth is good for Reddit?” The site has many facets, all of which require a healthy population to sustain their value. If the site did not have an estimated close to 70 million unique page views per month, could AskReddit get thousands of responses to stories from 911 dispatchers, bartenders, or pilots? Threads such as these are one of Reddit’s best assets, combining raw humanity with compassion and faith in humanity (and the all-too-occasional dick joke).

And then we have AMAs, which also demonstrate the good and bad sides of growth for Reddit as a whole. The larger Reddit becomes, the more it can attract large stars for AMAs. Ask Me Anything sessions range from the absurd (“Per Request: I was a dildo engineer”) to the famous (“I am Gerard Butler”) to the political (“I am Barack Obama, President of the United States”) to the downright terrifying (“I have penectomy last year and my penis, testes, and scrotum were removed”). They tend to generate good publicity for Reddit as a collective, but the possible negative repercussions of the celebrity AMAs in particular have been taken seriously by the community. Both Woody Harrelson and Morgan Freeman, for example, were outed for using PR men to answer their questions and often refused any questions not on the topic they were there to plug (“Why doesn’t anyone want to talk about Rampart?”). This is actually a fairly idiotic move on publicists part, as a good AMA can earn you millions of fans. Just ask Louis CK, who’s done two AMAs and gave often thoughtful, funny responses—as if it were a real conversation, not just a Leno-esque setup so you can tell a funny onset story. As it should be. 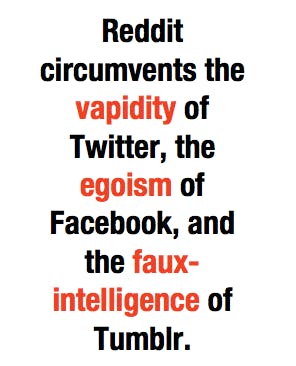 As Reddit grows, corporations begin to catch on more and more to the marketing power of such an enormous and engaged community. Social media marketing agencies actually run services which can give you upvotes for money with the hope that your company will be seen as hip and cool in the eyes of Redditors. A firestorm occurred on Reddit’s copious r/gaming board when a marketer posted to the board, claiming to have seen Microsoft employees flooding Reddit. Supposedly the user “mistysilver” witnessed employees seeding positive stories about the Xbox One and “mass downvoting” negative votes. “According to my boss,” said the Redditor, “MS have[sic] just brought in a huge sweep of SMM [Social Media Marketing] managers to handle reputation management for the Xbox One.” While mistysilver is anonymous (and posts across the thread have been mysteriously deleted), it’s being taken seriously enough to be picked up by trade publication Business Insider.

In the end, whether growth is good for Reddit depends on what makes Reddit great for you. Do you enjoy intelligent debate, honest stories, and the occasional cute kitten? Then growth will add fuel to the furnaces of r/TrueAskReddit, r/AskReddit, and r/aww. Do you hate your parents, Christianity, and the XBox One? Congratulations! Reddit is already what you want and will likely remain so.

The future of Reddit lies in its user base—one that cares so much precisely because it is unique. Reddit circumvents the vapidity of Twitter, the egoism of Facebook, and the faux-intelligence of Tumblr. And as long as the site administrators let the crazy train go down the track by itself, free from the “VC meddling” Ohanian admonished Kevin Rose for, every new user should care just as much.

So to Redditors everywhere: let’s quit worrying that we might be getting too big for our britches, and just enjoy this. The site is huge, and for good reason. Do you really want to be one of those kids complaining that you liked something first? Ask Digg: being first isn’t always best.

Ben Branstetter is a writer and blogger living in Central PA. He attended the Milton Hershey School and studied Secondary Education at Penn State University. His work has been published in Thought Catalog, The Useless Critic, God of Lamb, and he has appeared on HuffPo Live. He can be reached by email [email protected] and found on Twitter @BenBranstetter.