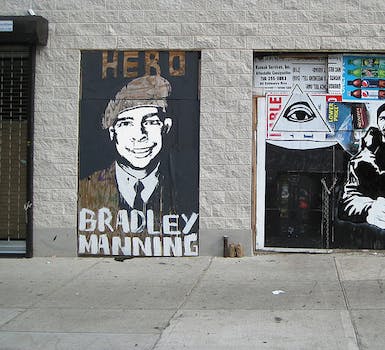 Donors vow to match all donations on behalf of Bradley Manning

Before 2012 draws to a close, two anonymous donors have promised to match donations on behalf of Pfc. Bradley Manning, the man responsible for leaking classified U.S. military documents.

Before 2012 draws to a close, two anonymous donors have promised to match donations on behalf of Pfc. Bradley Manning, the man responsible for allegedly leaking classified U.S. military documents.

Donations made through the end of the year would be automatically doubled up to $10,000 to help pay for Manning’s upcoming court martial.

“You have already raised enough money to hire Brad a top-notch civilian attorney,” Lorraine Reitman wrote on BradleyManning.org. “And thanks to your work, Brad has been freed from the torturous solitary confinement conditions.”

Manning was arrested in May 2010 on a variety of charges, including the capital offense of “aiding the enemy,” fraud, espionage, and theft. These charges stem from his releasing 700,000 classified military documents to Wikileaks.

Manning was recently named Person of the Year by British news organization The Guardian and nominated for the Nobel Peace Prize.

This fall Manning and his legal team finished a 10-day pretrial hearing where the defence argued to have all charged dismissed because of his “illegally long pretrial confinement,” Nathan Fuller wrote on BradleyManning.org.

“The Rule for Court Martial (RCM) 707 affords 120 days from arrest to arraignment to constitute a speedy trial,” Fuller said. “However, Bradley was arraigned nearly two years after his arrest and will have been imprisoned for nearly 1,000 days if his court-martial begins as scheduled on February 4, 2013.”

Manning’s trial is now expected to begin in March. Hopefully, with enough donations, it will be a fair one, Reitman added.

“We can do this, if we all pitch in,” she wrote. “As we head into the court martial in 2013, let’s make sure Bradley Manning gets the very best defense.”