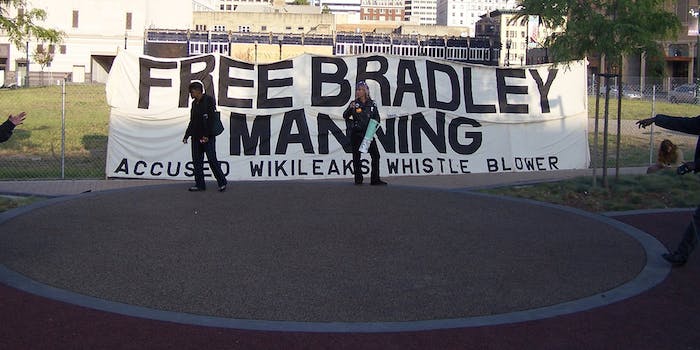 Bradley Manning will be tried for aiding the enemy

The charge carries with it a maximum sentence of death.

Bradley Manning, the 25-year-old U.S. soldier who leaked 700,000 classified military documents, will be tried for “aiding the enemy,” a judge ruled today.

In 2010, Manning uploaded a massive trove of U.S. military intelligence to WikiLeaks. Among his disclosures were a series of 75,000 reports revealing both civilian and military deaths in Afghanistan as well as the controversial video, dubbed “Collateral Murder,” which showed U.S. military helicopter pilots in Baghdad firing on and killing unarmed (and armed) Iraqis and two Reuters journalists.

Since Manning’s trial began in June, he has pleaded guilty to 10 counts of mishandling classified materials—which alone could get him 20 years in prison—but not guilty to the charge of aiding the enemy. His attorney argued that he did not intentionally give U.S. secrets to the enemy.

The judge ultimately allowed the charge to stand against Manning, ruling that the prosecution showed that when the soldier leaked the military documents he knew he was “dealing with the enemy,” reported the Los Angeles Times.

The charge carries with it a maximum sentence of death. The prosecution has said it won’t seek the death penalty, but Manning could still face life in military custody without the possibility of parole.