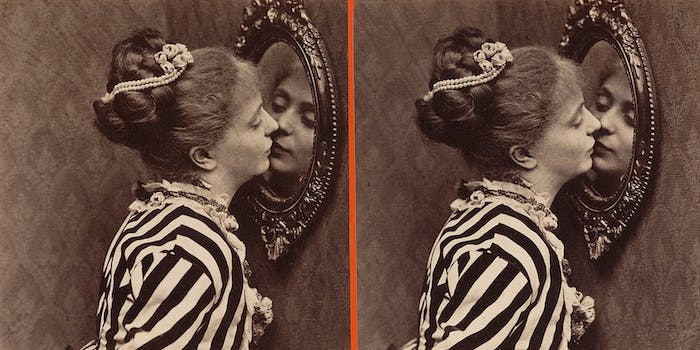 Why do gay men attract mates that look like themselves?

"What’s sexier than dating yourself?”

Of all the benefits of a same-gender relationship, the biggest perk has got to be the increased clothing options. If you’re queer and dating someone around your size, you immediately have doubled your wardrobe without ever having to leave the comfort of your own home. On those days where you’re sick of looking at everything in your closet, you can march right into his—until one day, you forget whose Brooks Brothers shirts are whose.

When my Most Significant Ex and I broke up, I wasn’t just losing a partner. I was losing all of the socks that don’t have holes in them.

There’s a problem, though, with sharing a life (and a dresser) with someone: you start to become as interchangeable as your ties, a walking Face Mash of a human. The longer Mark and I dated, the more we became a third thing, a unit that was neither me nor him.

Being in a long-term relationship is like romantic Stockholm Syndrome, where you start to take on the traits of your captor. Your interests become similar. You become a Person Who Reads Joyce. You listen to classical music with them. You find you like classical music. Maybe it’s more than just foreign subsidized vowels after all.

If this is a truth universally acknowledged that you become more like the person you’re dating, why do we continue to be so scandalized by it? On Tumblr, a page called Boyfriend Twin maps not just the tendency of couples to look-a-like but our ongoing fascination with partner similarity. Boyfriend Twin’s headline asks, “What’s sexier than dating yourself?”

According to Boyfriend Twin’s creator, the answer to that question speaks to a link between sexuality and narcissism, as he claims in an interview with BuzzFeed. He was originally going to call the page “Dopplebangers.”

The same-sex aspect of Boyfriend Twin gives it a Black Swan voyeurism, titillating viewers with the idea of twincest. Supernatural has been doing this now for nine seasons, much to the delight of fan fic writers everywhere. But while the premise is attention grabbing, gay people don’t have a monopoly on dating themselves.

In the Seinfeld episode best remembered for killing off Susan via envelope adhesive, Jerry immediately falls for a woman named Jeannie Steinfeld (played by Janeane Garofalo) after she saves his life. But what draws him to her isn’t just circumstance: it’s how much they have in common, even down to their initials. Is she his match or his clone? Is there a difference?

Seinfeld’s thesis suggests that dating yourself would be exhausting. “I can’t be with someone like me,” Jerry protests. “I hate myself!” But basic human nature suggests an affinity for those who share our characteristics—if not our exact facial structures.

In Noah Baumbach’s Kicking and Screaming, there’s a moment where Parker Posey’s character, an outsider hanging out with a group of male friends, observes that they all talk the same. They exhibit the same speech patterns and even tell the same sorts of jokes. As friends, the four of them exhibit the same characteristics as an old married couple—with a style of banter that’s less Samuel Beckett than an accumulation of a shared history.

“Friendgroup Twins” doesn’t have the same pull of taboo as “Boyfriend Twins,” but it would show universal our need for belonging to a unit is. In high school, fitting into a group of friends meant buying into their dress code, wearing pink on Wednesdays or forgoing vests.

We adopt a shared identity as a way to feel that we are a part of something larger than ourselves, which is the same reason that many of us get into relationships or find religion. We need something to subscribe to or help us feel more like ourselves.

This does not change when we grow up, even though we’d like to think it does.

In a sense, my friend was right—type attracts type—but not in the way he thought. Researchers at the American Psychological Association found that we don’t want to fuck ourselves. We’re just as likely to date someone who shares a birthday or a first name with us, which affirm positive associations between ourselves and our partner. Other research shows that we’re more likely to trust those that look like us.

The APA study brands it as “implicit egotism,” but there’s nothing egotistical about hoping to find a part of yourself reflected in someone else. I think what makes us so uncomfortable about the Boyfriend Twin Tumblr is that it makes explicit something we all do. We might not be fucking a mirror ala Justin Timberlake, but we’re all looking to find ourselves in other people.