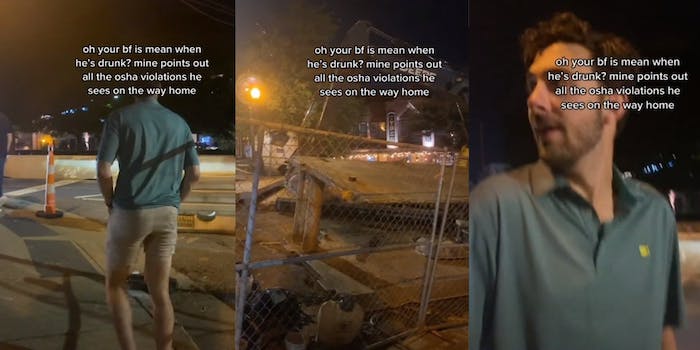 'Oh your bf is mean when he’s drunk?'

People do weird things after they’ve had a few drinks too many. While some of these behaviors are dangerous, many are harmless—they may laugh louder than usual, be a little less choosy with their words, or otherwise do things that people might not expect of them.

TikToker Ann (@annvanlauren) recently proved this after a video of her boyfriend went viral. In the video, during which Ann implies her boyfriend is drunk, the two walk by a construction site.

“Oh your bf is mean when he’s drunk? mine points out all the osha violations he sees on the way home,” she wrote in the text overlaying the video.

OSHA refers to the Occupational Safety and Health Administration, which sets standards for construction and, as the name implies, occupational health and safety.

Her video currently has over 1.3 million views.

In the comments section, users claimed her boyfriend’s behavior is not as uncommon as Ann may have thought.

“My husband points out houses that were built in the flood plain or even worse, in the flood way,” one user claimed.

“My husband would point out every potential fire hazard or buildings with ‘structural damage,’” another alleged. “he was a FF/Fire investigator for several years.”

“Me except w restaurants cause I’m a health inspector,” a third wrote.

“Mine is all the sprinkler systems in the building and if they’re done right,” a further user shared.

Ann eventually explained how her husband came to be knowledgeable about OSHA regulations.

“He worked for a company contracted by homeland security and he needed military clearance and daily osha training to work,” she detailed in the comments. “He works in sales now.”

Drunk or not, users supported the husband’s actions.

Others also pointed out the importance of the enforcement of OSHA standards.

As one user wrote, “rules don’t enforce themselves.”