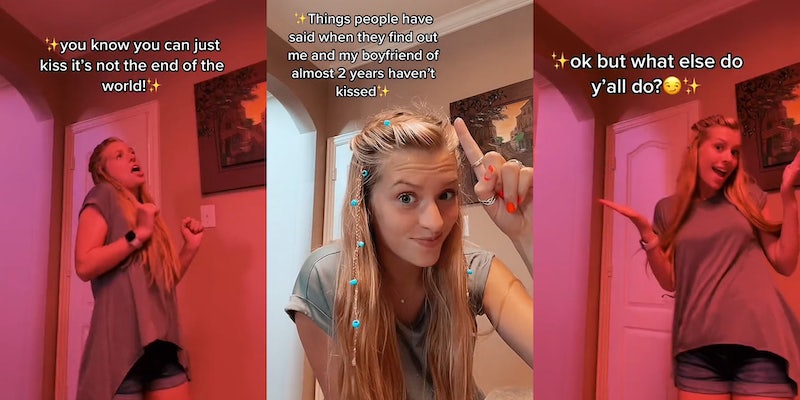 ‘Friends without benefits’: TikToker says she and boyfriend haven’t kissed after 2 years of dating, sparking debate

Earlier in the month, TikToker @kaytlin.oneall shared information that shocked users on the video-sharing platform: She and her boyfriend of two years never kissed.

In a video titled “things people have said when they find out me and my boyfriend of almost 2 years haven’t kissed,” Kaytlin shares some reactions she gets when she shared this information as she dances. The reactions range from the obvious “For real!?!??!” to “WHY!?!??”

She pinned a comment commending her for her restraint and having “boundaries.” But the majority of commenters reference her two-year “friendship,” or allege that the boyfriend is gay. The video garnered more than 2 million views.

O’Neall doesn’t explicitly state why they haven’t kissed in that TikTok, but from her YouTube channel, it’s clear that she is a religious person. The description on her channel, where she has 45 subscribers, reads in part: “I want to be a light for the Lord.”

In a more recent video, O’Neall asks her boyfriend, who’s sitting next to her, if he’s gay: “Absolutely not. Heck no.” He claims that they “were best friends, and then, we fell in love.”

There are an increasing number of Christian influencers on TikTok, as well as a concerning surge in Christian nationalism on the app. In other follow-up videos, in which she addresses questions about their relationship, she uses words like “conviction” and “salvation” and references the Bible. She says in one video that she decided she didn’t want to kiss a boyfriend before marriage, after praying on it.

The Daily Dot reached out to @kaytlin.oneall.

Update 8:09am CT, July 27: O’Neall responded to the Daily Dot, saying: “Ultimately, I was very shocked at the response and how controversial it turned out to be. Now that it has blown up, I look at it [as] an amazing opportunity to share our testimony that you can have a healthy, balanced relationship that doesn’t go with societies [sic] standards.”