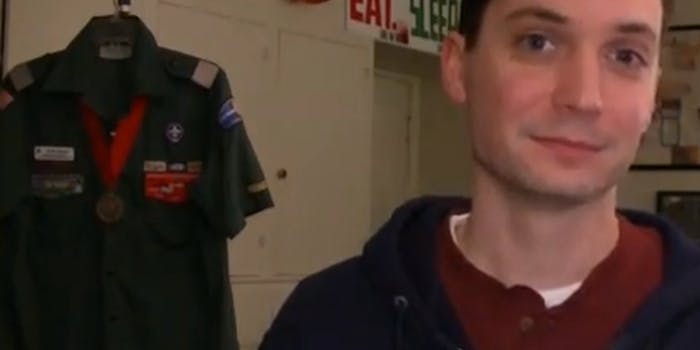 "The only way we will we ever change the Boy Scouts' discriminatory policies is if those on the front lines representing themselves to thousands of scouts every single summer start engaging in some open dialog on this issue," said Derek Nance.

A Boy Scouts counselor in Nevada has taken to YouTube to express his distaste for the Boy Scouts of America’s stringent policies against LGBT culture—and to come out himself as a gay member of the longstanding community.

Reno native Derek Nance has spent his summers at the Mataguay Scout Ranch since he first set foot on the 840 acre California property 10 years ago. He considers it his favorite place in the world, the land where he’s met his best friends, answered his foremost fears, and learned his most valuable lessons.

But because of the Boy Scouts’ archaic views towards gays and homosexuality—simply put, the organization doesn’t tolerate it—Nance has long had to keep a few secrets to himself. He can’t admire any sort of texts he receives from boys, can’t talk about the actors he thinks are cute, can’t share in the emotional roller coaster that comes with falling in and out of love.

Nance has long been out with his friends and family back home. But in one of the communities he’s held most dear, he’s had to remain silent. Until this week.

On Thursday, Nance took to YouTube to announce to the Boy Scout community that he was gay and had been mostly public about it for many years. From his bedroom and with his uniform hanging in the background, Nance delivered the news swiftly and with purpose. Then he broke into the main message behind his entire video.

Nance knows full well that his coming out prohibits him from maintaining a job at Mataguay, but he had to take the chance.

“The only way we will we ever change the Boy Scouts’ discriminatory policies is if those on the front lines representing themselves to thousands of scouts every single summer start engaging in some open dialog on this issue,” he said. “Lawsuits from the ACLU or confidential reviews by the Boy Scouts are not going to change policies. The first step to coming to an agreement on this issue is to drop the old pretenses or stereotypes and start talking.”

It seems as though the talking has already started. In July of 2012, 10 Boy Scout staffers in Sacramento, Calif., quit in response to the firing of a gay staff member named Timothy Griffin.

Videos like Nance’s have gone up in the past. There are organizations and online networks dedicated to bringing these topics to the forefront of conversation. Nance will be there to push those conversations along—and he’ll patiently wait until that day comes when he’s welcomed back into the Boy Scout community.

“It has taken me many years since first coming out to finally speak up against the Boy Scouts’ policies,” he said. “I hold everyone who continues to work at camp in the highest regard, and I encourage you to do so for as long as you can. Until the time comes that I can again work at summer camp without having to hide who I am, this uniform will proudly hang in my closet waiting for things to get better.”