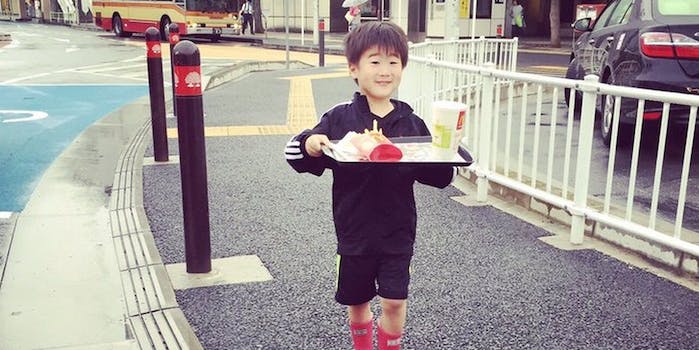 A big moment in every child's life.

There’s a time in every young boy’s life when he finally steps into manhood. While the Jewish religion has the bar mitzvah to mark this transitionary moment, there’s only one tribulation that truly tests an adolescent’s capability and adulthood: ordering solo at McDonald’s.

Professional Japanese baseball player Hayato Arakaki was hanging out with his nephew, who wanted to brave the fast-food establishment by himself. Realizing that this was a pivotal moment in this youngster’s life, his relatives sent him into the fray. He returned to the car unscathed, adorably proud of himself as he carried out a tray of delicious french fries and a large drink—with a sincere smile on his face.

The internet is lovin’ it—the picture of Arakaki’s nephew, that is. His tweet has racked up over 88,000 retweets and 130,000 likes in a couple of days.

Now, it’s unclear why exactly he emerged from the McDonalds with a tray, which is usually a no-no. But hey, mistakes happen, and part of adulthood is learning from them. This kiddo—I mean young man—is on his way to becoming a full-fledged adult, confidently ordering Big Macs all by himself.

They grow up so fast.