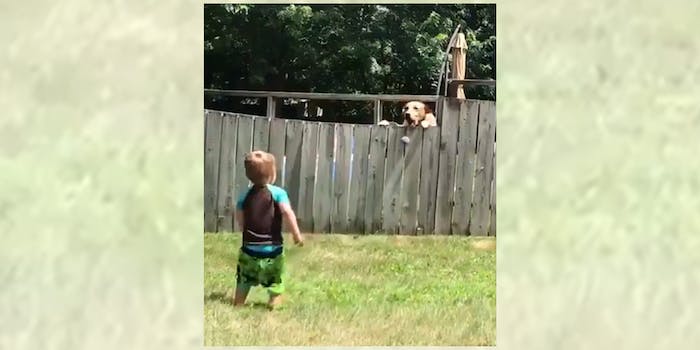 These two didn't let a fence stand in the way of their fun.

“Good fences make good neighbors,” or so said Robert Frost in his 1914 poem “Mending Wall.” That certainly seems to be the case with this 2-year-old boy and his dog friend.

Although the fence separating the two pals is taller than either of them, it doesn’t prevent them from having a game of fetch. Chad Nelson, a photojournalist from Minnesota, posted a video of his son happily throwing a ball over a fence, and an equally happy-looking dog dropping it back over to the other side.

“A fence can’t stop my two-year-old from playing with his new best friend.” Nelson wrote on Twitter.

A fence can’t stop my two-year-old from playing with his new best friend. pic.twitter.com/9QBuaq4Ee2

The video has been up less than 24 hours and has already been viewed almost 5 million times.

OH MY GOD THIS IS THE CUTEST THING WHAT THE HELL

Best thing on the Internet today.

My fence could not keep the neighbor from visiting my 1 year old. pic.twitter.com/OnswD2GsBS

A few people also took the time to point out that this kid has one heck of a throwing arm for a 2-year-old.

That little one has great hand/eye coordination for such a little guy. I see a future in sports for him.

Decades from now, when your son is being inducted into the MLB hall of fame for his pitching accolades, he can point to this video as the start of this pitching career.

Whether or not this kid makes it into the baseball hall of fame remains to be seen, but if they ever open a friendship hall of fame, these two are a shoo-in.