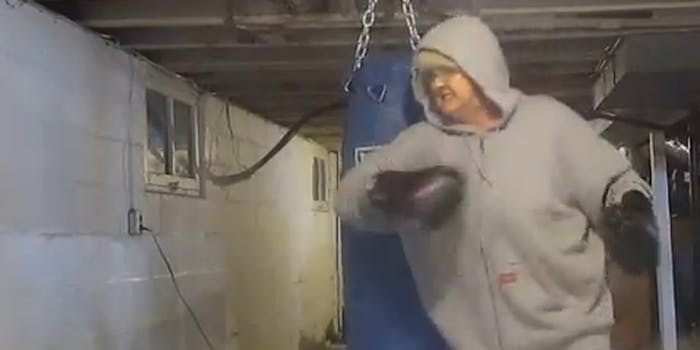 Meet the Rocky Balboa of grandmas

Straight up, this bad mamma jamma grandma Mrs. Brown rules and rules often. No joke, she’s a freak of nature, a senior citizen who somehow owns a pair of boxing gloves and cutoff hipster jeans, a zip-up hoodie, and a dingy basement that would make Buffalo Bill most proud.

Mrs. Brown cites no reason for her 3:19 display of awe-inspiring athleticism in her newly released “Flying High Now! Yo.” All one can deduce is that she possesses some type of affinity for Rocky Balboa. She dances onto the screen to the tune of “Gonna Fly Now,” the theme song from the legendary Rocky series, and begins to take years and years of aggression out on a blue Everlast punching bag.

For the next three minutes she strikes, dances, recoils, and wails. She displays a sense of athleticism that, honestly, certain 28-year-olds can only imagine. She’s relentless. She’s hilarious. Then she ends her routine with a speech.

“This is the greatest day in the history of my life,” she says, once again evoking her mythological boxing idol. “I just want to say one thing: Yo Adrian, I did it!”

The question now becomes why a grandma—and make no mistake, Mrs. Brown is full grandma—would go onto YouTube to beat up a punching bag for three minutes.

“My bucket list,” she wrote to one of her detractors in the comments section. “To box with the elderly.”

She also wrote that only she can say her boobs are sagging. “At least I didn’t step on them,” she wrote.

Is Mrs. Brown committed to started a boxing career at the age of 62? She might just be a lassie out there looking for some YouTube fame. Her channel, which, aside from an equally strange July video in which she celebrates her birthday alone, hasn’t received any serious attention whatsoever. Of the 35 videos, most have received between 25 and 650 views, though there is this “Feel like shit? Get up and Dance like God” clip that attracted 2,000 viewers and appears certifiably insane.

So does her house, actually.

In fact, everything this woman does is a little bit off the deep end. The two of us should hang out. I’ve got a punching bag and some Jefferson Airplane cassettes. I bet we could find a way to fill out the afternoon.