It’s happened to Super Bowl champ Julian Edelman and even more recently to James Harden, which seems to be the incident that inspired Bow Wow to share his knowledge. In a post that he’s now deleted, the rapper gave us the breakdown: 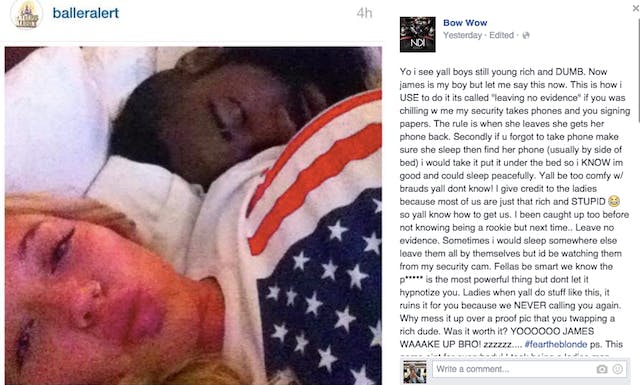 Yo i see yall boys still young rich and DUMB. Now james is my boy but let me say this now. This is how i USE to do it its called “leaving no evidence” if you was chilling w me my security takes phones and you signing papers. The rule is when she leaves she gets her phone back. Secondly if u forgot to take phone make sure she sleep then find her phone (usually by side of bed) i would take it put it under the bed so i KNOW im good and could sleep peacefully. Yall be too comfy w/ brauds yall dont know! I give credit to the ladies because most of us are just that rich and STUPID so yall know how to get us. I been caught up too before not knowing being a rookie but next time.. Leave no evidence. Sometimes i would sleep somewhere else leave them all by themselves but id be watching them from my security cam. Fellas be smart we know the p***** is the most powerful thing but dont let it hypnotize you. Ladies when yall do stuff like this, it ruins it for you because we NEVER calling you again. Why mess it up over a proof pic that you twapping a rich dude. Was it worth it? YOOOOOO JAMES WAAAKE UP BRO! zzzzzz…. #feartheblonde ps. This game aint for everybody! I took being a ladies man serious. You got to go all out PROTECT your brand your image.

You can really tell how worked up he is from all the caps and exclamation points. But he has some good tips, like taking her phone into your own hands once she’s fallen asleep.

Maybe there will even be a CSI: Cyber episode about this situation?