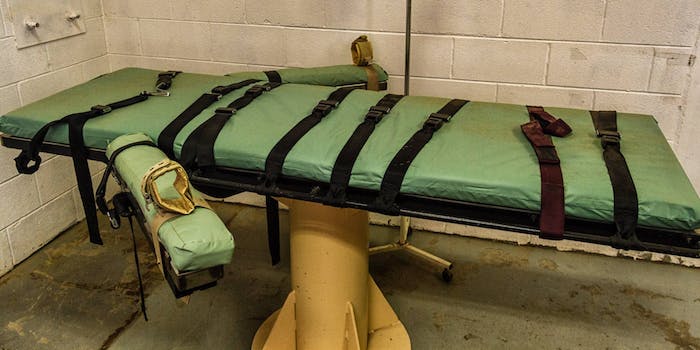 Dzhokhar Tsarnaev might be a monster, but he’s a monster who deserves to live.

Save for abortion, there may be no issue in recent American history that’s been as controversial as the use of capital punishment.

Throwing the debate into the spotlight once again, the Boston Maratthon bomber, Dzhokhar Tsarnaev, was found guilty this week on 30 separate counts in the attack. Seventeen of those charges come with potential death penalty sentences. Having injured over 250 people, three of which were killed, Tsarnaev was widely expected to be convicted, however, the defense argued that he was largely under the influence of his older brother (who was killed shortly after the attack), so as to put Tsarnaev in a better position to avoid execution when sentencing does come down.

It’s not unnatural to call for blood in a situation like this. Tsarnaev’s actions were heinous, and any compassionate person would wish that the survivors and family members of the deceased get the justice they deserve. Yet we should not put Tsarnaev to death, nor should we do so for anyone else in his position.

Polls out of Boston do not advocate for Tsarnaev’s execution. Instead, the city which he committed his horrible crimes against seem to be more in favor of life in prison. Bostonian leaders have likewise echoed this sentiment, with Roman Catholic Bishops of Massachusetts and liberal powerhouse Elizabeth Warren also coming out against the death penalty for Tsarnaev. Complicating matters even further is the fact that the state of Massachusetts has already outlawed capital punishment.

It’s not unnatural to call for blood in a situation like this.

But Tsarnaev’s case is a federal one, which changes things entirely. And while Boston may not necessarily be in favor of the death penalty for Tsarnaev, the rest of Massachusetts appears to feel differently.

Arguing in support of the capital punishment, Dennis Scimeca wrote an essay last week in the Kernel (an Internet magazine published by the Daily Dot) stating that as he sees it, it’s all about the society we want to live in, versus the society we do live in. “Maybe I’m naïve for thinking such a world could exist, but I think that between scientific advances, a better class of law enforcement officer, and breaking down the stigma of mental illness, humanity can get there,” he writes. “Maybe the idea of justice can actually mean something in that future. It certainly doesn’t seem to mean anything right now.”

As someone who lives in Boston, Scimeca has an added interest in Tsarnaev’s fate. But unlike a lot of other people in Boston apparently, he doesn’t see life in prison as an appropriate punishment. He claims this has nothing to do with revenge, but everything to do with our larger responsibilities as a society. “I wonder if I’d be able to push the button or pull the trigger that would lead to the death of Dzhokhar Tsarnaev by the state, if he is found guilty. I’d like to think that I could,” he writes. “We profess not to believe in cruel or unusual punishment. Sentencing Dzhokhar Tsarnaev to a life sentence in solitary confinement, because he likely wouldn’t survive in gen pop for very long, sounds more cruel to me than execution.”

Scimea’s assertion that Tsarnaev wouldn’t last long in prison is an interesting one and worth considering. But if you’re going to bring hypotheticals into the equation, you should first take into account what we already know. “Tsarnaev was 19 at the time of the bombing; he was apparently a heavy drug user; he had no prior criminal record,” states the Boston Globe’s editorial board. “By themselves, none of these would seem like a particularly good reason to spare him, but taken as a whole, and alongside evidence of his brother’s dominant role, they should plant seeds of doubt.”

Domestic terror is tricky business, because in cases like Tsarnaev’s, details quickly get clouded. Killing someone like Osama bin Laden on sight makes sense: a foreign threat, responsible for taking hundreds of American lives, and hiding out in Pakistan. From a basic military perspective, his death was a major victory. But what about executing a young man, possibly unstable, and under various harmful influences, here at home? It’s not the same story. The biggest domestic terrorist attack since 9/11, what Tsarnaev did was undisputedly evil, in the same way the attack on the World Trade Center was evil before it. But circumstances matter, no matter how much we might like to pretend that they don’t.

From a practical standpoint, executing Tsarnaev would also be an extremely lengthy process, likely to drag on longer than anyone wants it to, only stirring up more pain in the process. “Sentencing Tsarnaev to death would ensure endless appeals, substitute vengeance for justice, and risk letting him become a martyr,” writes the Globe’s editorial board.

Out of all these concerns, it is the last one which is perhaps the most significant. Making Tsarnaev a martyr is dangerous and scary but also very possible. As a young, fanatical American, at his worst he’s also the perfect symbol for a whole new generation of terrorists. “It would be better not to give such people an emblem for their cause, especially given that Tsarnaev’s original crime was, in his thinking, an act of revenge,” writes the New Republic’s Elizabeth Stoker Bruenig.

When we think of terrorist martyrs, we think of cowards. But the rest of the world doesn’t necessarily see things that way. We should be careful of inadvertently elevating Tsarnaev’s legacy to a status that would, in his mind, validate what he did.

The discrepancy between how Americans want to see themselves as opposed to how the rest of the world sees us is also at the core of why the death penalty is the worst outcome in Tsarnaev’s case. “Tsarnaev deserves no sympathy,” declares the editorial board of the Los Angeles Times. “But he should not die at the hands of his government. To execute Tsarnaev would be to adopt the mentality of terrorists, who seek to sway the actions of others through violence. This country is—or at least should be—better than that.”

To wit, Americans want to see themselves as setting standards at a global level. But we can’t execute our citizens at alarming rates and expect the rest of the world to go along with it when we play the role of police officer. America does have to be better than that, if we want to retain even a shred of the flawed promise this nation was built upon.

But the chief basis for not executing Tsarnaev, or anyone for that matter, is also the simplest. As the L.A. Times puts it, “the real reason to spare Tsarnaev’s life is that no crime warrants the death penalty.” The editorial board elaborates, continuing: “The jury should reject capital punishment and sentence Tsarnaev to life in prison without possibility of parole because that is how a mature society acts. Not out of vengeance. Not out of passion. Killing another human being is immoral, whether by bomb or by lethal injection.”

If we execute Dzhokhar Tsarnaev, he wins. Not only does he become a martyr and not only do we validate his belief that we are no better than the countries we are at war with, we also help to perpetuate an endless cycle of violence, which suggests that the response to brutality is more brutality.

If we execute Dzhokhar Tsarnaev, he wins.

Right now, it’s more pleasurable to think about Tsarnaev rotting away in prison like an animal than it is to think about the possibility that he could be “rehabilitated” or that he could seek some kind of forgiveness. But in either scenario, the most fitting punishment for his crimes is life behind bars. We cannot, as a society, let him escape from thinking about what he’s done, everyday for the rest of his life. We cannot give him the easy way out. We cannot let him win.

The debate around the death penalty is probably best summed up by Michael Dukakis’ notorious gaffe in the 1988 presidential debate. When asked whether he would still oppose the death penalty were his wife to be raped and murdered, Dukakis (who, incidentally, oversaw the initiative to get rid of capital punishment in his time as Governor of Massachusetts), responded by saying that he would. Naturally, he looked cold and unfeeling. After all, wouldn’t practically anyone want an equal punishment to be handed down to someone who took away the life of a person they loved?

The problem is that while people are expected to be angry and violent, institutions have to be bigger than people. The state should not be allowed to emotionally lash out in the same way that the people they govern sometimes do. People will always be swayed by their personal relationships, unequipped to make moral decisions for the greater good, especially when the ones they love are involved. Although institutions don’t always live up to this task either, we should never stop advocating for them to do so.

Whether the state decides for or against the death penalty in Dzhokhar Tsarnaev’s case, there is precedent for either outcome. Ted Kaczynski (i.e., “Unabomber”) was given life in prison, where he remains today, but Timothy McVeigh, of the Oklahoma City bombing, was executed for his crimes. The latter sentence probably better represents America’s leanings on domestic terrorism as they are, but the former represents the way they should be. Both of these men were monsters, but if we continue to let our emotions rule the way in which we govern, then America can forget about ever having any right to present itself as the moral leader of the world.

Dzhokhar Tsarnaev might be a monster, but he’s a monster who deserves to live.

Chris Osterndorf is a freelance journalist whose work has appeared on websites such as The Daily Dot, Mic.com, Salon, xoJane, The Week, and more. When he’s not writing, Chris enjoys making movies with friends. He currently lives in Los Angeles.

Photo via Ken Piorkowski/Flickr (CC BY 2.0)