Case in point: BootyFix.com. Sure, it’s a hilarious name, and on the surface it seems like an unassuming place to find videos of girls shaking their asses. Not the most progressive of websites, but certainly nothing horrifically gross, right?

Well, here’s the thing. BootyFix’s tagline is simply “Deleted YouTube Booty Videos.” So while a lot of the videos on the site are YouTube embeds, there are many more that will bring you to a screen like this. 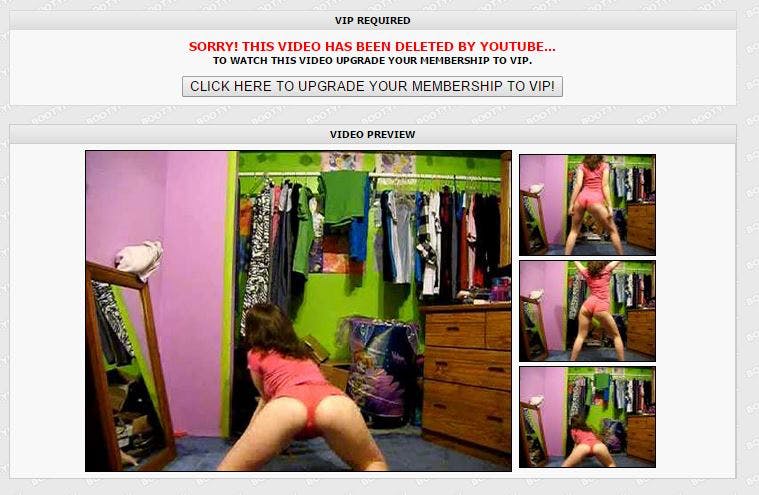 That’s right, the lizardbrains behind BootyFix apparently have backups of the hundreds and hundreds of twerking videos that have been deleted from YouTube. To access them, you have to become a VIP member, which will run you about $20 a month. Does that make you feel uncomfortable? It probably should!

Many of these deleted YouTube clips were zapped by moderators, but there are certainly some taken down by the women who star in them—so it’s more than a little creepy to permanently store 480p ass-waggling where it can never be destroyed. It’s also borderline illegal. Putting content that other people made behind a paywall is straight-up unethical in any case.

There’s a chance BootyFix is the most forward-thinking thirsty YouTube archiver in the world, but we’re pretty confident these women don’t know their deleted booty videos are  hosted on this site. Their content is being sold for a profit without their knowledge, which means BootyFix at the very least owes a whole bunch of people some royalties.

Let this be a lesson kids: If you upload your butt to the Internet, there’s a chance it may be there forever—even if you delete it.