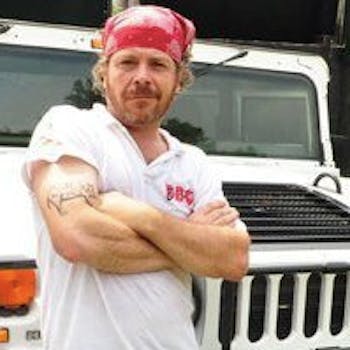 Boners BBQ  folks regret having responded so publicly to a woman who he says stiffed them on a tip and then left a lousy Yelp review. But he didn't do it unprovoked, he tells us.

Boners BBQ isn’t proud about what they did to a customer who gave them a two-star Yelp review. But the Atlanta restaurant owner Andrew Capron still thinks he should have gotten a chance to tell his story.

Customers were laughing in the background (“They’ve heard this 5,000 times,”) as Capron attempted to explain his side of the story to the Daily Dot over the phone. Working in his small establishment with just one waitress, Capron told us that we were the sole news outlet to contact him for comment.

“None of these people tried to confirm anything. That’s been part of the problem. People are going on basic hearsay, taking sides—our word versus her word. I have no reason to lie and put my entire livelihood on the line,” he said.

“It would be purely idiotic of me to do that. Not that my actions weren’t.”

Capron’s actions: posting Stephanie S.’s Yelp profile photo on the Boners Facebook page with the caption “NOT WANTED!” Not good customer service by any standard.

However, both Capron and waitress Jennifer Villegas maintain that Stephanie was no ordinary customer. In fact, Villegas said she was the worst she’d had waited on in years:

“They had a discount and ordered a lot of food. Every time I went to the table, she was munching down on everything, but all the while telling me how everything could be better as she was eating it. I told her, BBQ is just one of those things, sweetie, where there are so many different ways to do it. And then she proceeded to tell me that our baked beans should have molasses!”

Villegas, who has been working at Boners BBQ since April, said she’s been stiffed on tips at other waitressing jobs, but never at Boners.

“You know, I’ve been doing this for nine years, and you gotta take the good with the bad. But this really blew my mind. I felt like I was over accommodating, they wanted nothing, their drinks were always full. But to complain about everything? And on top of that no tip?”

Stephanie told the Huffington Post that she left two twenty dollar bills on the table for her waitress, but the similarities in their stories end there. Stephanie said that the $40 took care of the bill and the tip.

Villegas, however,  said she took the twenties to the cash register with Stephanie’s $32.40 bill (Capron promised to send us a copy of the bill, but said he is currently busy with customers). She returned with $7.60 in change, and left to clear some plates. When she returned, Stephanie, her husband, and the change were all gone.

“As soon as I went to the kitchen, they left with change in hand and they were gone. No tip at all. There’s no bussers, no other waiters—just me and the owner,” Villegas told us.

That evening, to add insult to injury, Villegas noticed a new Yelp review on Boners. She immediately called Capron.

“Jennifer found the Yelp review, called me at home and told me about it,” Capron said. “Stephanie’s picture was on the review.”

Capron then put it up on the restaurant’s Facebook page, an action he now regrets. He said he had no idea how much attention his restaurant would receive.

“I apologized. I tried to make amends. I’m quite frankly flabbergasted people paid so much attention to this. If people would get off their computers and go back to work, this country would would have a much better economy.”

Our interview with Capron ended there.

“I’ve got to go: there’s a customer in front of me, and I don’t want him to go home and write a bad Yelp review,” he joked.