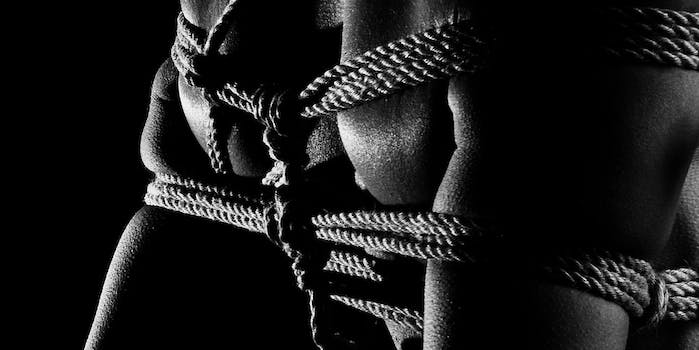 This is my journey from browsing FetLife to being the star performer at an international bondage event.

The first time I agreed to be tied up for a photo shoot, I never imagined that a few years later my face would be advertising the world’s largest display of public bondage. In fact, the first time I did a bondage shoot, I really didn’t know much about it at all.

That fall I saw an ad looking for a rope model for a photographer and rope artist named Thorns, who was visiting from out of town. I admired his photography and rope work and it seemed like a good opportunity to get new photos for my portfolio, so I volunteered.

That photo shoot was the hardest I had ever done. I was tied into challenging positions that made yoga look easy and were well beyond what I had done in rope to that point. The stress of the ties and the strain on my muscles from holding positions reminded me of being an athlete, of working to the point of exhaustion but achieving something wonderful. The pictures from that shoot remain some of my favourites even now. I was starting to understand what bondage was about, and I was excited to do more.

Over the next year I did more photo shoots, including another shoot with Thorns, discovered my inner escape artist and became a demonstration model for local classes on Shibari. It was during this time that Thorns told me about an event he was participating in, Morpheous’ Bondage Extravaganza (MBE), the world’s largest display of public bondage. The event had started as a small group of friends showcasing rope work in a storefront on Toronto’s Queen West, and had become an event that showcased rope bondage artists from around the world in a 12-hour-long public exhibition.

It was 2011 and I lived on the other side of the country so I couldn’t attend, but I was able to watch the live feed of the event online. I was glued to my computer watching it all with fascination. The performances I saw looked almost like dancing. There was a connection between the rope artist and the model that I had never seen before. I promised myself that one day I would be good enough to perform at the event.

By the next fall, I had moved to Toronto and had applied along with hundreds of others from around the world, hoping to be selected to perform during that year’s exhibit. The day my acceptance email came, I alternated between terror and elation. The list of performers numbered more than a hundred, and included big names of people who are considered leaders in the world of rope artistry and bondage. I felt out of my league. However, when I was given the names of my assigned performance partners, I was happy to discover a familiar name in the bunch. My last scheduled scene of the night would be with Thorns.

The night before MBE, a meet and greet event is held for performers and volunteers. For many it is a chance to reconnect with friends from around the world and relax before the hectic performance night. For me, my first one was terrifying. I walked into a room filled with people I only knew from a social media site, people who had done this before. I was looking for a seat, feeling out of place, when I heard someone yelling my name.

Startled, I turned around to see a man smiling at me and holding out his hand. He said he recognized me from my photos and introduced himself as Morpheous, founder of the event, sex educator, author, and photographer. By taking the time to make me feel welcome, he set me at ease and in no time I was introducing myself to people and asking a hundred questions.

When it came time to perform the next night I was a bundle of nerves. I was opening the exhibit doing a suspension scene with a rope artist from Sweden named Hedwig. We had been warned the night before that thousands of people would be watching, both online and in the venue, but the reality of strangers standing around and staring at you half naked was more daunting than I had expected. Luckily Hedwig is amazing at what she does and my nerves were quickly forgotten, as her vision of aerial storytelling forced me to focus on what was happening, not the crowds around us.

The rest of the night passed in a blur. I moved from one scene to the next, taking time to talk with people in the audience and answer their questions. Performing was so different than photo shoots, I started to feel a sense of connection between my partner and I, but by 2am, before my scene with Thorns, I was exhausted.

For me, that exhaustion translated into truly letting go for the first time, into fully connecting and trusting a partner, not worrying about how I looked, concentrating instead on the moment and the rope against my skin. Looking back, I can say with certainty it was then that I really fell in love with rope, and understood why I loved it. When I saw the first photos and videos from our performance I didn’t recognize myself. I had transformed.

Hearing the feedback from the audience afterward, and reading the comments from the live stream and on local blogs was amazing. People spoke about how they were drawn in by our scene, how they could feel a connection even from a still image. Yes, there were negative comments. Someone said my leg wrapped in rope looked like a Christmas ham, and an older woman blamed “girls like me” for the problems with society before turning on her heel and leaving the venue, but they were easily ignored. I knew when I walked out of the venue as the sun was rising that I would be back to do it again the next year.

When I received an email in May, asking if I would be interested in shooting for the 2014 MBE poster I didn’t think twice before saying yes. The theme of MBE 2014 is “Formal Affair” and I got to wear a gorgeous dress for the shoot where normally I would be in underwear or nude.

More importantly, I got to be tied by both Morpheous himself, and my good friend, an amazing rope artist named Vera. The pictures chosen from the shoot for the MBE promotional materials are possibly the best I have ever taken and are definitely the ones I am most proud to be able to share with the world.

The first time I was in front of a camera, bound in rope, I didn’t dream that a photo of me would end up on posters and across the Internet. I never thought when I first applied to perform at MBE that I would one day be the face of it. I am honoured and humbled to be given the opportunity, and hope that I can continue to share my passion for bondage as I continue my journey with rope.