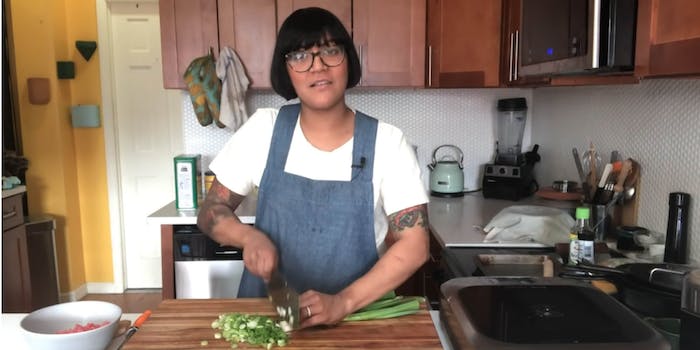 In one clip, Brad Leone, who has his own show, asks Sohla El-Waylly how to pronounce turmeric.

Though Rapoport’s resignation came in part because of a 2013 photo of him in brownface, Business Insider detailed allegations of toxic work culture, racism, sexism, and non-white employees being vastly underpaid for their labor. Condé Nast’s head of video, Matt Duckor, resigned on Wednesday after racist and homophobic tweets were recirculated.

One of the first employees to pull back the curtain, before Rapoport’s resignation, was Sohla El-Waylly, who detailed her experience at the company on Monday, stating that “only white editors are paid for their video appearances” and that she was “pushed in front of video as a display of diversity.” She said she was hired at $50,000 a year, despite having more culinary experience than many of the white editors.

The Bon Appétit Test Kitchen, the video arm of the company, has a devoted fanbase built around its on-camera personalities, a YouTube channel with 6 million subscribers, and fan-run meme accounts. To illustrate just how much unpaid labor El-Waylly does, Twitter user @s_whip_ edited together a montage of her fellow employees calling for help and advice, and it’s very telling in terms of who the company puts on camera versus who has actual talent. In one clip, Brad Leone, who has his own show, asks El-Waylly how to pronounce turmeric. At the very end, Rapoport mistakes Priya Krishna for El-Waylly during a public event. (Krishna confirmed the pay disparity El-Waylly noted to Business Insider.)

Elsewhere, editor Andy Baraghani called out fellow editor Alex Delany for a resurfaced Vine in which Delany uses a homophobic slur, calling it “hurtful and triggering and all too familiar.” Delany’s old tweets and Tumblr posts objectifying women were also brought out.

But Alyse Whitney, a Korean-American writer, accused Baraghani of using “his popularity to sway editorial decisions and undercut my work,” including attempting to kill a story about Queer Eye‘s Antoni Porowski because of his personal feelings about him. Though Rapaport is gone, Whitney said that acting editor-in-chief Amanda Shapiro “was also a huge part of perpetuating the toxic culture” there.

It appears Rapoport isn’t content to try to learn from this. Jezebel printed an email conversation with Rapoport, who apparently took issue with a reporter calling his decision to dress as a Puerto Rican for Halloween “brownface,” and placed the burden of explaining racism (and basic journalism) on women. Business Insider also spoke to Rapoport’s former assistant, Ryan Walker-Hartshorn, who was only paid a salary of $35,000 (in New York City) and repeatedly denied a raise, despite not being able to pay rent. In addition to disclosing that she was made to clean Rapoport’s golf clubs and do tasks for him on the weekend, she said he kept that same 2013 photo framed in his desk.

Bon Appétit has been called out before for whitewashing dishes, but the stories coming out this week address a much bigger issue of disparity and appropriation in food culture. After May’s backlash around comments from New York Times food columnist Alison Roman, Krishna told Eater that her recipes often didn’t meet the company’s SEO requirements: “I have been told so many times that my Indian food isn’t click-y, that it won’t get page views, and then I see white cooks and chefs making dishes that are rooted in Indian techniques and flavors, calling it something different, and getting a lot of attention.”

On Wednesday, Bon Appétit “staff” issued a “long-overdue apology,” addressing many of the issues brought up this week: “Our mastheads have been far too white for far too long. As a result, the recipes, stories, and people we’ve highlighted have too often come from a white-centric viewpoint.” It vowed to “be transparent, accountable, and active as we begin to dismantle racism at our brands.” As many people pointed out, however, it sounds like a lot of the apologies that have been issued from corporations in the last few weeks, made even less impactful coming from “staff” and not specific people at the top.