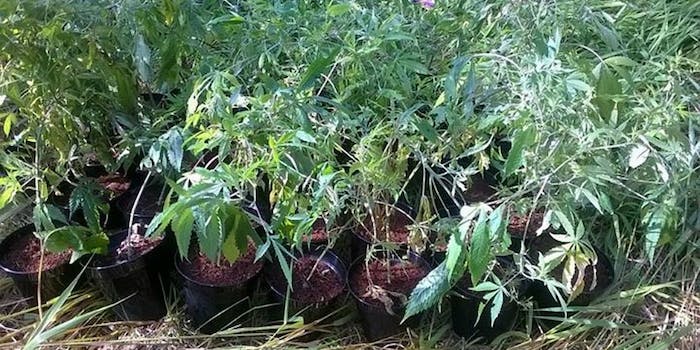 You'd have to be really high to fall for this trick.

If you’re a parent, one of the lessons that should be imparted to your kids is that, by and large, policemen exist to help those in trouble. If there’s danger, we tell our offspring, find a policeman or policewoman, because they will know exactly what to do to help.

Another thing you’d ideally pass down is common sense.

Police in Bolton, England, hope that you, as a child, absorbed the first lesson from your folks but maybe not the second attribute. Witness:

Forgetful horticulturist mislaid 37 cannabis plants in Moses gate country park, if it's you call in for a chat. pic.twitter.com/meZ4wp9pHc

According to the Mirror, the police came across the haul while searching the park on a missing persons call. As far as we know, nobody has come forward to claim the missing marijuana.

But perhaps we’re being too cynical about this entire exercise. Maybe the police were really trying to help the rightful owner of the potted plants recover his wares. After all, Bolton claims that it’s one of the most welcoming places in the whole United Kingdom.

That motto most likely extends to the cops as well, no?

They're budless male plants, used in the process. You're doing someone a favour by getting rid off them. @GMPBoltonSouth