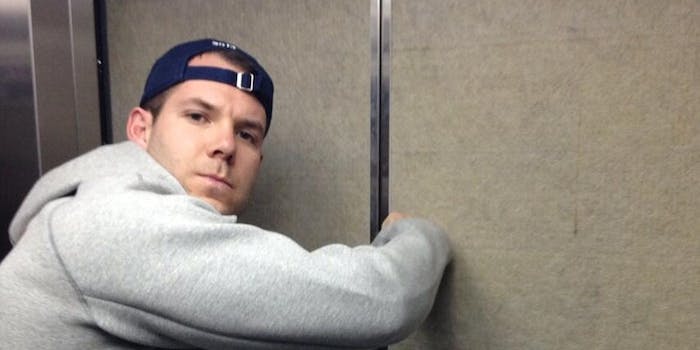 Bobsledder who escaped from Sochi bathroom gets stuck in hotel elevator

Sochi hotels seem to have it out for Johnny Quinn.

Sochi may not be able to build a bathroom that is able to hold Johnny Quinn, but it certainly got the job done with an elevator.

On Monday, U.S. bobsledder Johnny Quinn, whose destructive escape from his hotel bathroom made headlines this weekend, once again incurred the wrath of the shoddy workmanship gods that have ruled the accommodations at the Olympic Games. This time, he, along with teammate Nick Cunningham and bobsled director David Cripps, became stuck in an elevator.

Once he discovered that bursting through the doors was not an option this time, Quinn naturally took to Twitter to broadcast the situation.

Cunningham and Cripps also tweeted out photos of the latest predicament.

Of course I’m with @JohnnyQuinnUSA when the elevator door breaks and we get stuck! Good thing I’m with him! pic.twitter.com/cnVQlDgQV4

Now we’re stuck in the elevator! Can @JohnnyQuinnUSA get us out ? pic.twitter.com/sVbyksEXlc

According to KHOU-TV, the three men were rescued shortly after tweeting the photos.

While very few Sochi structures seem to give Quinn a break, his wasn’t the first incident involving an elevator. Just two days prior, Rebekah Wilson and Paula Walker, two bobsledders from Great Britain, almost walked into an open elevator shaft in their hotel.

A word to all Olympic athletes: When the festivities conclude and you see Johnny Quinn board your plane on the way home—RUN.