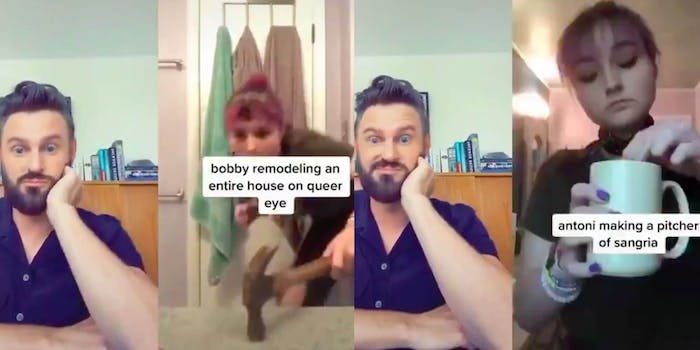 Bobby knows he does most of the work.

Netflix’s Queer Eye Fab Five member Bobby Berk seems to have thrown some subtle shade at his castmates in a now-deleted TikTok.

A TikTok user posted a video, which he later duetted, showcasing how Berk does major home renovations, while Karamo Brown, Jonathan Van Ness, Antoni Porowski, and Tan France do much smaller tasks on the hit Netflix show. Berk seems to have agreed that he does most of the work, which is also a long-running joke amongst Queer Eye fans.

TikTok user @geneleave posted the video last week, garnering over 850,000 views and attention from none other than Berk himself.

On the show, the Fab Five choose a contestant who was nominated by family or friends to get a full lifestyle makeover, from a fresh hairdo to a redesigned home. Each of the Five has their own unique talent they play into, and Berk’s is interior design. He usually reinvents the interior of the contestant’s home while they spend time with France getting a stylish new outfit or with Van Ness in a grooming session. He duetted @geneleave’s original video by reacting to it with side-eyes and nods.

“Bobby Berk remodeling an entire house on queer eye,” the text on the video says. In the TikTok, @geneleave pretends to be Berk running around with a hammer to Nicki Minaj’s “Roman Holiday,” sped up to make it sound panicky. Then, she pretends to be Porowski “making a sangria” and Van Ness “giving a haircut” at a much slower pace to Lana Del Rey’s “Queen of Disaster.”

The duetted TikTok lived on Berk’s official page for almost a whole day until it was taken down without notice. But @geneleave’s comment section is filled with love for Bobby.

“Every time they cut to Bobby he’s working hard af,” TikTok user Jacques L’Abbé said. “And then they flash to Antoni or Karamo they’re playing with the dog.”

Another TikTok user named Lily said, “BOBBY DOES THE MOST and people say he’s their least favorite.”