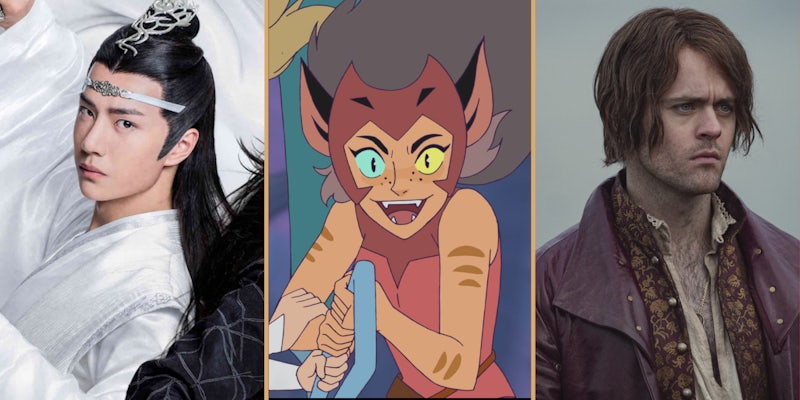 The rise of ‘Blorbo From My Shows,’ Tumblr’s fandom mascot

Here's why Tumblr's trending topics are currently full of nonsense words like 'blorbo.'

When you’re enraptured by a new fandom, it’s like the honeymoon phase of a relationship. Suddenly all you can think about is BTS, or Supergirl, or the elaborate lore behind a Minecraft roleplaying server. Every song lyric reminds you of your favorite character; every GIF deserves a 3000-word analytical essay.

If this experience sounds familiar, then you’ll understand the popularity of Tumblr fandom’s meme du jour: Blorbo From My Shows.

Blorbo originated in a Dec. 24 post from Tumblr user thelustiestargonianmaid, mocking the common habit of people tagging unrelated posts with fandom commentary: “Bitches will be like ‘prev tags omg’ on my post and I check the preg tags and it’s like ‘blorbo from my shows.'” Basically, imagine posting a heartfelt quote from a Richard Siken poem, and then having 30,000 Supernatural fans reblog it with comments about its obvious relevance to Dean and Castiel. A quintessential Tumblr experience.

While the original Blorbo post is derisive, other people decided that Blorbo is, in fact, extremely relatable. Over the next two weeks, Blorbo became a site-wide phenomenon:

Blorbo represents every rando character you keep seeing on your dashboard, celebrated in painfully sincere terms by some quasi-stranger you’ve been following for years. Blorbo is ubiquitous and universal. Everyone has a Blorbo.

Complaining about Blorbo-posting is antithetical to Tumblr culture. It’s a Blorbo-centric economy.

Of course, this running joke isn’t entirely restricted to Tumblr. Blorbo could easily be related to Blorko, from a viral Marvel tweet last month:

Between Blorbo and the absurdist humor of horse plinko (the site’s first big meme of 2022), Tumblr’s trending topics are descending into a kind of Simlish word-salad. As one post put it, the finale of the Tumblr Cinematic Universe should be “a team-up between glup shitto, scrunglo and blorbo. they take the eeby deeby elevator to rescue the plinko horse from superhell.” If you understood that sentence without further context, then you have my sympathies.

As of now, “eeby deeby” is the #2 trending topic on Tumblr—an older nonsense-phrase meme that resurfaced in conjunction with Blorbo and horse plinko. It’s the kind of chaotic, self-referential humor that thrives on Tumblr, largely incomprehensible to outsiders.

And as several people have pointed out, this meme has a morbidly amusing context within Tumblr’s recent history as a platform. Two weeks ago, Tumblr “banned” (or rather, limited the app search results for) an absurdly long list of supposedly-NSFW keywords, ranging from mental health terminology (depression, PTSD) to innocuous words like “girl,” and the Frosted Flakes mascot Tony the Tiger.

There’s a certain poetry to the idea of Tumblr users circumventing this problem by inventing a brand new vocabulary. Posting screencaps from Tumblr’s dizzying lineup of trending tags (blorbo, scrunglo, glup shitto…), one blogger summarized the situation thusly: “tumblr banned half the dictionary so we just made new words.”