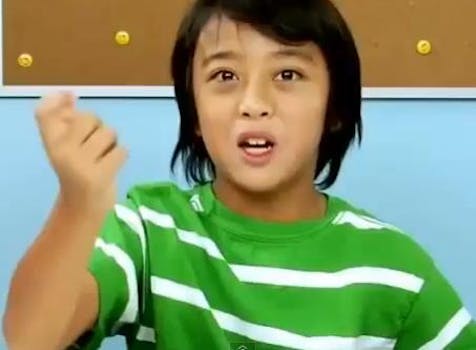 Blood sushi now on the menu

This young man prefers his sushi with blood on it. His own. As he eats it, the Internet repeats it.

“Let me eat the sushi with my blood on it!” 10-year-old Dylan Djoenadi exclaims to the camera, almost violently.

Djoenadi uttered this phrase in an episode of Kids React, a popular Fine Bros YouTube show banking on the absurd and wise things kids say. The episode where Djoenadi makes this seemingly inexplicable sushi (maybe it makes sense to a 10-year-old boy) statement aired on August 21. The object of his reaction? Smosh, a popular YouTube comedy duo.

The phrase “Let me eat the sushi with my blood on it!” has since spawned dozens of remix videos and hundreds of Twitter mentions.

One YouTube remix of Djoenadi saying the phrase over and over has seen more than 9,000 views. In a meta moment, the Smosh duo made a reaction video to Djoenadi’s video reacting to them.

One YouTuber made Djoenadi’s statement nine minutes long, while another incorporated his statement in a Pokemon clip.

Given the large size of both communities, it should come as no surprise that a meme—a repeatable, mutable inside joke—would emerge when they intermingled.

“LOL Poor kid… He probably always dreamed about getting﻿ famous but definitely not on this way xD” writes haraf8 on the nine minute version of the video.

Comments fighisver on the same video: “This﻿ kid is going to be a samurai when he grows up, and when he kills someone he’ll eat the sushi with their blood on it.”

“If I ever have a﻿ kid, I hope they’re as epic as this kid.” writes TehSlan on Smosh’s reaction to Djoenadi.

Technically Djoenadi’s line hasn’t reached the status of a full-blown meme—the kind chronicled in sites like Know Your Meme or featured in Quickmeme or Meme Generator—but it may be on its way.

Yipper81 comments on the Kids React to Smosh video: “i hope that asian kid knows he﻿ made his own meme :D”

Neither The Fine Brothers, or Djoenadi’s parents, were reachable for comment.