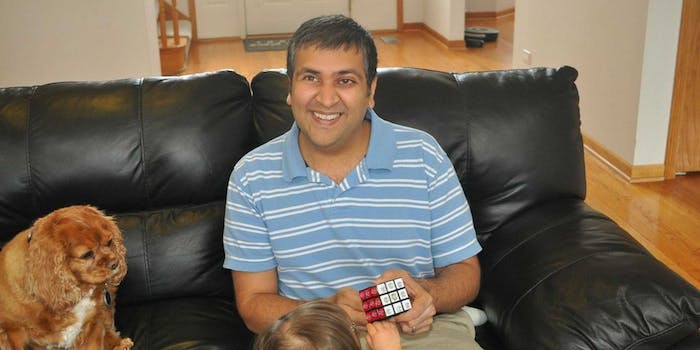 "For my next challenge I'm going to run for, and win, a seat on the Illinois House of Representatives," Doshi writes.

Last week, Sameer Doshi, a 32-year-old engineer who went blind after cataracts surgery and a reaction to steroid drops, posted photographs of himself solving a modified Rubik’s cube on Reddit.

Since he could no longer see well enough to play games, he wanted to try his hand at solving a Rubik’s cube, to which he added Velcro, plastic gems, and Dora the Explorer puffy stickers so that he could solve it without requiring much sight.

People were amazed at the feat (and someone called Doshi a “champion”), but many had a more pressing question in mind: If Doshi is blind, how does he even use a computer in the first place?

Instead of simply explaining the process on a Reddit comment or a post, Doshi decided to visually demonstrate how he uses a computer with just a simple software accommodation.

For the redditors, he goes to Reddit’s front page and uses ZoomText Magnifier on his Windows 7 PC to make text large enough for him to read.

“And to some extent I can even see the picture,” Doshi said. “Sometimes images are difficult to see, especially if they have a lot of noise, like if they’re from an iPhone. But after scanning a little bit, I can usually tell what it is.”

The program even makes icons bigger, which is essential to his work as a software engineer.

Now that Doshi can modify the things around him so he can use them, what’s next on his plate?

“For my next challenge I’m going to run for, and win, a seat on the Illinois House of Representatives,” Doshi wrote.