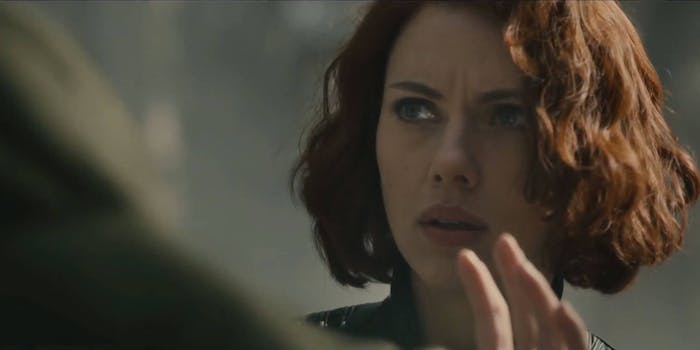 Scarlett Johansson deserves better—and so do all women.

Comic book fans are notoriously loyal. So it’s no shocker that fans on the Internet were riled this week when Avengers stars Chris Evans and Jeremy Renner referred to Black Widow (Scarlett Johansson), also known in the series as Natasha Romanoff, as a “slut” and a “whore” while laughing raucously.

The comments were made during an interview promoting the upcoming release of Avengers: Age of Ultron, where Black Widow has a more developed, prominent role than in the previous film. The interviewer alluded to this when she asked Evans and Renner their thoughts on the film’s major female lead being romantically tied to Bruce Banner (Mark Ruffalo) in the upcoming release. “A lot of fans were…invested in the idea of Natasha with either or both of you guys. And obviously now she’s with Bruce, what do you guys think of that?”

Renner quipped, “She’s a slut!” Evans exploded with laughter before adding, “I was going to say something along those lines. She’s a complete whore.”

“What a trick, man,” agreed Renner.

The female interviewer goaded them on referring to the Black Widow as a “sidekick” who would flirt “with whoever” before Renner sealed the topic with a final flippant, “Whatever, she has a prosthetic leg anyway.”

Both men were quick to repent for their comments, though to dissimilar degrees.

Chris Evans released a statement to Entertainment Weekly acknowledging the immature and insensitive nature of the comments:

Yesterday we were asked about the rumors that Black Widow wanted to be in a relationship with both Hawkeye and Captain America. We answered in a very juvenile and offensive way that rightfully angered some fans. I regret it and sincerely apologize.

Renner on the other hand, issued a less direct apology: “I am sorry that this tasteless joke about a fictional character offended anyone. It was not meant to be serious in any way. Just poking fun during an exhausting and tedious press tour.”

Renner’s tone is reminiscent of his response earlier this year, when many criticized his lascivious remarks about co-presenter Jennifer Lopez’s “globes” at the Golden Globes.

A reminder not to take this shit so serious. Thanks Jennifer — You're a gem.x #goldenglobes #hadtosayit #jlo http://t.co/Rg68ZbCIQT

While many will be quick to defend the comments as playful or harmless, and while it’s entirely possible that Renner intends his female colleagues no harm, the comments he made are not, thus, rendered harmless. This is because they represent a broader pattern of demeaning and disempowering attitudes toward women. When we write these remarks off as “just a joke” and put pressure on the audience to “lighten up” we risk masking very real issues that limit the roles women can have both on screen and off.

Fully realized, strong female characters are few and far between, not only in Hollywood, but particularly in action films. In a world of fantasy and superhuman feats, a woman who wields power is an exciting opportunity for actresses and for audiences who are eager for variations on the limiting roles women have had both in entertainment and in real life.

Alternately, strong female characters, especially those who do not submit to being one man’s sexual partner, can be very threatening. In the film noir of 1940s cinema, this woman emerged as the femme fatale. John Blaser explains the significance of such female leads in “No Place for a Woman: The Family in Film Noir”:

[The femme fatale] refuses to play the role of devoted wife and loving mother that mainstream society prescribes for women. She finds marriage to be confining, loveless, sexless, and dull, and she uses all of her cunning and sexual attractiveness to gain her independence. As Janey Place points out, “She is not often won over and pacified by love for the hero, as is the strong heroine of the forties who is significantly less sexual than the film noir woman.” She remains fiercely independent even when faced with her own destruction. And in spite of her inevitable death, she leaves behind the image of a strong, exciting, and unrepentant woman who defies the control of men and rejects the institution of the family.

When the interviewer casually asks for their thoughts on a woman, fictitious or not, striking up a romance with another male lead, it’s no wonder then, that wittingly or unwittingly, these men retaliate. They may not wish to attack their co-star, but they are nearly gleeful in their swift attack on a female character.

This is a dangerous impulse, especially when addressed so casually. If we accept this kind of candid commentary, we accept that a woman, real or fictional, who dares to defy the expectations of existing to be one man’s sidekick, or one man’s property, needs to be reduced. We accept barbs veiled as “jokes.” The joke that she is a “slut” or a “whore” is coded language. It says, she may have defied the social order, but she is still beneath these men. In fact, the joke here renders her completely worthless. In case we didn’t get the message, Renner points out, she’s doesn’t even have two real legs.

This kind of debasing of a female character is all the more troublesome when we consider the state of the gender balance of power in Hollywood today. Just this Wednesday, Deadline reported that a new study by Women in Film and the Sundance Institute found male directors outnumbered female directors 23-to-1 for the top grossing 1,300 films since 2002. The reason for the paltry number of female directors? According the study: gender stereotyping.

Women are denied opportunities, according to the study, because it’s presumed they don’t want actually want them, specifically in the world of action movies and blockbusters. When the researchers asked female directors what movies they would be interested in, however, nearly half said they did have an interest in directing action films and big-budget features.

Perhaps most interestingly, the study found that the further a female director climbs up the distribution ladder, the worse the problem gets:

The study found that the gender gap widens with each step that women directors take up the distribution ladder, widening from 4-to-1 for U.S. films shown in dramatic competition at Sundance to 6-to-1 for films distributed theatrically on more than 250 screens to 23-to-1 for the top-grossing films.

Much like the Black Widow amid a team of male superheroes, if a female director dares to aspire to create something large-scale and spectacular, she’s likely to find herself with few allies at the top.

If Renner and Evans really thought their interviewer had asked a silly question, perhaps they could have deflected by telling a joke that did not cut down their female counterpart, especially when Black Widow has already been left off a great deal of the merchandizing for the series. If Johansson’s co-stars are wary of her character, they aren’t the only ones that don’t know what to do with Black Widow.

After all, she’s tough, resourceful, and stunningly skilled in hand-to-hand combat. In fact, she might just be too tough to keep up with.

Nayomi Reghay is a co-creator and co-host of The Female Gaze, a daytime talk show parody that unites a diverse group of women to yell at each other in public. You can catch her performing stand up around New York and hosting her monthly character-based reality dating show spoof, The Middle-Income Matchmaker. She also hosts Mouthy: an open mic for broads and others with big opinions. She contributes regularly to Reductress and Femsplain. You can follow her on Twitter: @nayomir.