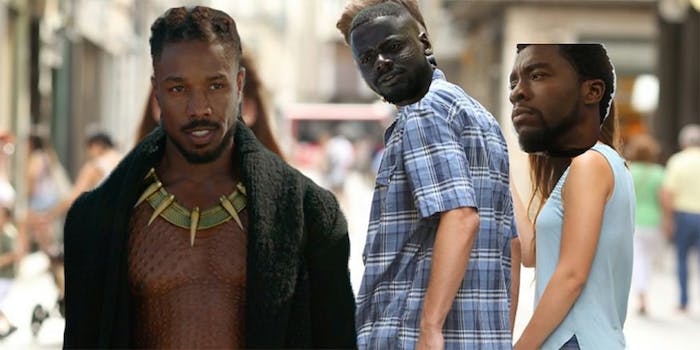 Don't turn your back on T'Challa!

In the film, the hero is T’Challa (Chadwick Boseman), aka the Black Panther. But when Erik Killmonger (Michael B. Jordan) arrives in Wakanda and competes for the title of King, other characters start taking his side. That includes W’Kabi (Daniel Kaluuya), who was formerly a good friend of T’Challa’s. The plot makes the perfect setup for the Distracted Boyfriend meme. Here, W’Kabi is shown being distracted by the new visitor and turning his back on T’Challa.

As it turns out, this conflict between these three characters in the film also works for another popular meme: the “Friendship ended with Mudasir” meme.

(I found this on tumblr) pic.twitter.com/bHMUVZrhAK

In case you forgot, this meme emerged after a man named Asif Raza announced in a Facebook post that he was dumping his best friend for a new one:

Black Panther managed to successfully slip in a reference to a meme in the script. Now the film is inspiring memes of its own. It looks like sharing memes are quickly becoming one of the best ways to discuss a film among other fans on Twitter after it opens in theaters. We’re not complaining.