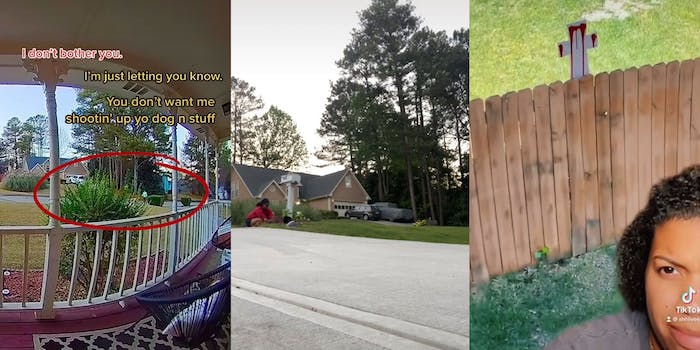 ‘Today I found out my neighbor’s a Black Karen’: TikToker chronicles drama with a ‘crazy neighbor’ who fired gunshots while she was gardening

The TikToker says her neighbor also put up bloody crosses and threatened to shoot her dog.

Dealing with neighborly squabbles can be frustrating, especially when conflicts erupt out of seemingly inconsequential gripes. Like when a tree on one person’s property is growing over another’s fence and drops leaves or chestnuts on their lawn. Or when a party runs a tad too late and someone calls a noise complaint.

Usually these rivalries culminate in a series of passive aggressive actions that hopefully fizzle out over time, but unfortunately, they do snowball into instances where violent acts are either threatened and or/followed through on.

TikToker @ahhliveea says that she experienced the latter when her “Black Karen” neighbor fired several warning shots because the video uploader was “gardening on her own property.”

@ahhliveea I had to pause the food videos to post this because this is getting out of hand. More videos to come. #crazyneighbor #stupidpeople #neighborsfromhell #foryou #fyp #crazy #neighborsfromhell #karen #karensgoingwild @urwxird ♬ Monkeys Spinning Monkeys – Kevin MacLeod & Kevin The Monkey

In the now viral clip we see a woman digging a hole and putting a potted plant into it as gunshots can be heard going off in the distance. The woman gardening doesn’t react to the firearm discharges and continues to nonchalantly work as the TikToker narrates the following: “Today I found out that my neighbor’s a Black Karen.”

“Listen, there’s seven shots. I didn’t know gardening was illegal on my property,” she continues.

Six more gunshots go off, and then someone else can be heard saying off-camera. “I don’t give a fuck.”

“I call this the diary of a mad Black woman,” the TikToker says in a voice-over.

The TikToker, who goes by Liv, posted a follow-up video that provides more context on the situation between her and her “crazy neighbor.”

She starts the story by addressing comments that pointed out the TikToker’s mentioning of her neighbor’s race. “So a lot of you guys brought up race in the comments,” she says. “Why did I mention it? That was just a question everybody was gonna ask. Guess what, mom’s white dad’s black that’s not a big issue.”

The creator also notes that she made a police report, but didn’t plan to rely on the police.

“Another question was, did I call the police?” she continues. “Of course I called the police, but in my county it takes forever for somebody to come so that was a lost cause. However, there was a report made. All right, so the next question you’re gonna ask is what’s going on, what’s happening, oh my gosh this is crazy.”

Liv then shows a picture of what appears to be a service bill in the TikTok and then chimes in with a whisper, “She thinks I’m stealing her WiFi.”

The video transitions to video footage of what appears to be crosses on her property that are painted to look like they have blood on them.

“So, on Sunday she puts up these crosses with…blood dripping down…I don’t know,” the TikToker says. “Can someone tell me what that is, please, looks scary. Police said they couldn’t do anything about it. Maybe I should name this diary of a crazy lady, because I don’t think it’s gonna end. Like, no I’m not selling my house.”

She also notes that she has more to share about her neighbor: “Story 2,3,4,5,6 is coming its way, there’s more footage of like other crazy stuff that happened, but please somebody tell me what those crosses mean.”

Many TikTokers expressed their shock and sympathy for Liv in the comments section, while others offered up some solutions on how to either end the squabble and/or incite further belligerence on her neighbor’s part.

“Put up a wooden fence and change WiFi. To not stealing your WiFi as the name,” one user suggested.

“Put up a sign facing her house that says ‘love thy neighbor,'” another said.

“Spray paint the cross with glitter,” a third user added.

“Flip the crosses upside down,” another viewer said.

“Girl be careful, people who act like that can be dangerous. I’d get some kind of protection!” one viewer urged.

“I think you can plant those little pine trees that can grow up to like 13 on your side of the fence so you don’t have to see her stuff,” another TikToker suggested.

“Have a fence built higher than the current one. Itll be on your property line and she can keep her lil posters to herself,” a third said.

As promised, Liv did post additional TikToks about her neighborly drama.

In the third part of her story-time she says that her “crazy neighbor” accosted her and her sister as they were doing some work in her (Liv’s) yard. The video then pans to said neighbor recording the TikToker as she sits on her balcony and reveals that there is yet another bloody cross facing Liv’s property.

In another clip, she provides audio of her neighbor threatening to shoot her dog, Tucker.

Retaliatory disputes between neighbors are a common enough phenomenon that there are law enforcement studies written on them. Arizona State University’s Center for Problem-Oriented Policing cites several tiffs between neighbors that have resulted in violence and state that long term documentation and reporting of these disputes provide law enforcement enough data to “execute an appropriate response” before they escalate to harmful action:

“Violent disputes that play out over a long time, involving multiple events and acts of retaliation, offer police opportunities to identify the dispute and then execute an appropriate response.”

The Daily Dot has reached out to Liv for further comment.