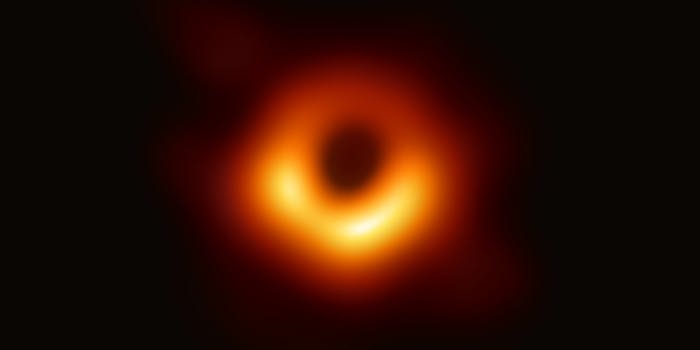 Unprecedented photo of black hole gets meme’d to the moon

We knew of the existence of black holes—objects in the universe that absorb everything around them and let nothing escape, even light. But until Wednesday, we didn’t have photographic proof. This morning, astronomers released the first image of a black hole, which is centered in a galaxy known as Messier 87.

The image was captured using the Event Horizon Telescope (EHT), a collection of eight telescopes from around the world, and shows light bending around the black hole. While the science community is thrilled, others are taking the opportunity to make memes out of this historic event.

Upon seeing this image, several people thought: “hey, this looks like a glazed donut.”

used Photoshop's shake reduction filter on the Black Hole photo and was amazed by the result#EHTBlackHole pic.twitter.com/RLBPyuIx3T

I am sure the spatial resolution of the #blackhole images will get better in future. pic.twitter.com/uN9lmN9fGe

Don't Worry I Got This pic.twitter.com/upAYWjtpeJ

And the jokes took off from there.

That's not a black hole pic.twitter.com/qRXTcaIaf6

You, an astronomer: Look at this majestic black hole!
Me, a birder: oh. oh no pic.twitter.com/yZT97JKFZO

If the thought of this black hole swallowing everything up is terrifying to you, take comfort in the fact that it’s 55 million light-years away from our planet. But there’s still the unsettling fact that this beast is 6.5-billion times the mass of the sun. Yep. Thinking about donuts is making that information a little easier to parse.