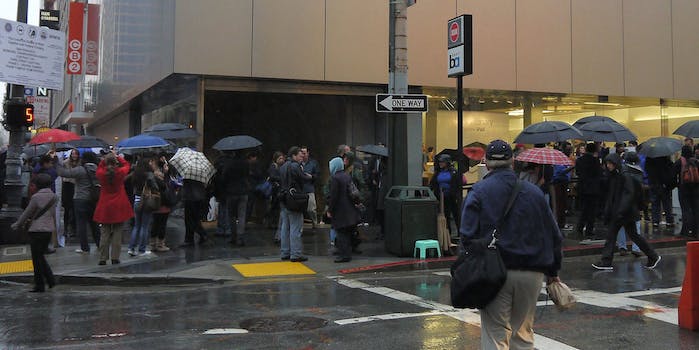 Black Friday is killing families (and Cyber Monday could save it)

Every year it seems the holiday shopping season comes sooner and sooner—and many retailers are forcing it to happen. The national shopping day known as Black Friday has successfully left its roost on the Friday after Thanksgiving and is swallowing the holiday itself. The nation’s largest chains of brick-and-mortar stores—Walmart, Sears, Toys ‘R’ Us, Best Buy, and more—will begin Black Friday deals the evening of Thanksgiving or even earlier, tempting American shoppers to partake in bargains before they’ve even digested the turkey.

The slow creep of Black Friday is worse on few people than it is the workers of these companies, most of whom earn meager pay and will earn little more for working on the holiday. The average retail sales worker earns $12.38 per hour, according to the Bureau of Labor Statistics, and most have few health or paid leave benefits, prompting many workers from stores like Walmart to join the #FightFor15 movement for a higher minimum wage. Some stores, most notably Nordstrom, will even pay their workers to stay home tomorrow in protest of the practices of their competitors and to “celebrate one holiday at a time.”

Thanksgiving, more than any holiday but Christmas, is meant to be a time for families to enjoy a physical space together in our ever-increasingly digitized world. One of the many benefits of Cyber Monday, the alternative to Black Friday for online shoppers and retailers, is the lack of time it takes away from a time most Americans might prefer to spend with loved ones over standing in long lines at the break of dawn.

Much like their physical counterparts, however, digital retailers have a lot to answer for in their own respect for their workers. Amazon, the largest online retailer in the world, has become notorious for the demanding and often cruel environment it creates for both its warehouse workers and its white collar workers. Employees in its fulfillment centers, in particular, have complained of a lack of sick leave, family leave, and even scrutiny over bathroom breaks.

Increased online shopping means an increasingly hard time for these workers. In 2013, Amazon reportedly sold 426 items per second in the buildup to the Christmas holiday, and each of those is picked, packed, and shipped by a human being most consumers never see from a company that has shown outstanding disregard for the well-being of their labor force. Tech companies typically lead on issues like paid parental leave and benefits for their workers, but Amazon has fallen behind in massive ways.

Recently, however, Amazon has pushed to soften its image, particularly after a New York Times expose published this past summer depicting Amazon as a ruthless, heartless workplace run by algorithms and immune to sympathy. Earlier this month, Amazon announced an expansive new parental leave policy granting working mothers 20 weeks of family leave and new fathers six weeks, moving the company from the rear to the front of most American employers. While pay and working conditions could certainly be altered for the betterment of Amazon and its employees, it’s a revealing decision which highlights Amazon’s vulnerability to outside pressure and competition.

Compare this to Walmart. The company employs 2.1 million Americans—roughly 1 percent of the labor force—and has an abysmal record on benefits, pay and worker conditions. Despite being the subject of worker strikes, boycotts, and protests for years, the company has budged little to change in the face of lawsuits from pregnant workers, sexually harassed workers, and thousands of complaints filed with the Occupational Safety & Health Administration. While the company has made promises to raise employee pay and improve working conditions in February, little has been done to this effect.

The relative elasticity of Amazon’s policies to public pressure should stand in stark contrast to that of Walmart and other traditional retailers. Amazon, unlike Walmart, must regularly compete with employers with far more progressive worker policies like Google, Facebook, and Microsoft for engineers, marketers, and programmers. A retail sales representative working at Walmart, however, isn’t facing significantly different challenges than one working at Sears or Best Buy—hence the lack of movement in that industry to alter policies in order to lure workers.

It’s quite possible to run a physical retail shop without cheating workers. Costco, in particular, has been continually praised for the pay and benefits it extends to all its workers. Costco pays its workers an average hourly wage of $20.89, compared to $11.21 at Walmart, and includes a premium package of benefits including health, dental, and long term disability. And it’s far from a charity—Costco has seen revenue grow each year in the last five and has even surpassed Walmart. President Barack Obama, in particular, has lauded the company for proving “that this isn’t just good for their business, it’s good for America.”

And yet companies like Walmart continue to give their workers little for increased work—especially over the holidays. One could easily argue retailers are being forced to expand Black Friday in an effort to combat the rise of online shopping, but the sales figures of the nation’s big box stores don’t match that hypothesis. Major companies like The Home Depot and Macy’s have seen their own online sales number grow in the face of Amazon, leaving one to question why they would focus on Black Friday at all.

The national shopping day has been a bane to workers hoping the holiday season could be spent more with loved ones and less with co-workers. But as long as shoppers are willing to cut short their own holiday in search for the best bargains, it’s a wish retailers will never let come true.

Amazon is yet to prove itself as a friendly environment to its workers, but recent changes in company policy should highlight the degree they are willing to change and contrast it with the concrete bruteness of retailers. As ubiquitous as online shopping has become, more Americans plan to hit the shops this weekend over the convenience of digital shopping. If we want to change the expectations these companies have for their workers, it can’t stop at petitions and protests—it needs to come down to your wallet.