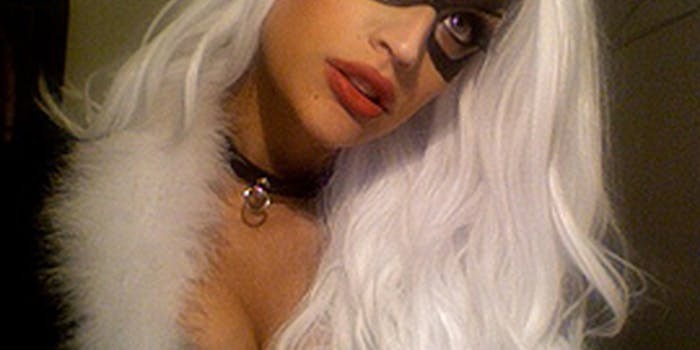 Cosplayer and fashion designer Mandy Caruso found support on Tumblr after being harassed by an interviewer at New York Comic Con.

When one female cosplayer decried her experience with sexual harassment last week at New York Comic Con, she met with dead silence on the con floor.

But 40,000 reblogs later, the applause from Tumblr is overwhelming.

After speaking to what she describes as the usual but well-intentioned socially awkward encounters, she describes a disturbing incident of sexual harassment in front of an audience:

This group of men from some kind of Stan Lee fan club blah blah internet video channel blah blah asked to interview with them on camera about Comic Con. I said well okay, sure. Camera is rolling. The “host” is a middle aged, rotund dude. It’s an all-male crew and lots of people (mostly guys) were beginning to crowd around. The following is the interview as burned in my mind. Keep in mind that I expected this to be about Comic Con in general.

And the entire crew and the crowd were SILENT. NOTHING. SHOCK, HONEY. It felt like I was in a heated fog, full of rage and pride and I sashayed away feeling like the most badass motherfucker in the whole damn room, but kind of also on the verge of tears. A slow build of applause would have been appropriate, but from the looks on people’s faces, they were just completely not expecting me to do what I just did- which was really nothing more than speaking up for myself. It wasn’t something one should feel brave for doing but crazy for not doing when necessary.

Less than 24 hours after posting about her experience to her Tumblr, Caruso had over 20,000 reblogs. Her ask Tumblr, dearbeautilation, was flooded with praise, questions, and fans declaring her a hero and an inspiration.

Caruso is a fashion designer and artist living in New York. The owner of a popular Etsy shop, she frequently models her own clothes, drawing inspiration from Tim Burton, Suspiria, and other film and geek culture influences.

Likewise, her cosplay for the character of Black Cat, a Marvel-verse superhero, is just one of many she has designed and modeled herself.

Simultaneously, the issue of how women who cosplay are typically treated at cons has received greater attention due to tension over the “Booth Babes” stereotype and other incidents in gaming and geek culture throughout the year. Earlier this year at San Diego Comic Con, actor Simon Pegg came under fire after he tweeted a picture of attractive female cosplayers. And in March, the Globe published a controversial piece in defense of the practice of objectifying women in public spaces.

New York Comic Con does not appear to have a harassment policy listed on its website, nor does it make any mention of a general convention code of conduct. Although Reed Elsevier, the corporation behind Comic Con, Book Expo, and other major conventions, does have an anti-harassment policy in place for its employees, no mention is made of a similar one for its conventions.

The Daily Dot was unable to locate the “fan club” responsible for the botched interview, or corroborate Caruso’s story. Attempts to contact Caruso were unreturned at press time. But lack of details or confirmation hasn’t stopped the story from spreading outside Tumblr, onto Reddit and other places.

“I just hope that the discussion can be less about making people aware that there are creepy assholish men at comic conventions and more about what women should do if and when they are faced with this type of guy,” Caruso added in a follow-up post. But most people are focusing their discussion on how the convention could have prevented the incident to begin with.

“Sometimes I wonder whether not all attendees of a comic con should sign a code of conduct that would allow them to be kicked out and their ticket revoked for sexist or racist behaviour,” wrote user zemo on Jinxworld forums earlier today.

But as the resounding silence Caruso received at NYCC makes clear, the lines about what “sexist behavior” actually is remain unclear—everywhere but Tumblr, at least.

UPDATE: Caruso told the Daily Dot she would rather not reveal the name of the group that interviewed her because “they would get a lot of publicity/ youtube views/ site hits,” and said the response to her post on Tumblr has been “fucking gorgeous.”

“I’m so proud of the community for stepping up and spreading the word and sharing their own stories, and if I have sparked a conversation about gender equality and awareness I am truly honored and thankful. We can be heroes!” she said.