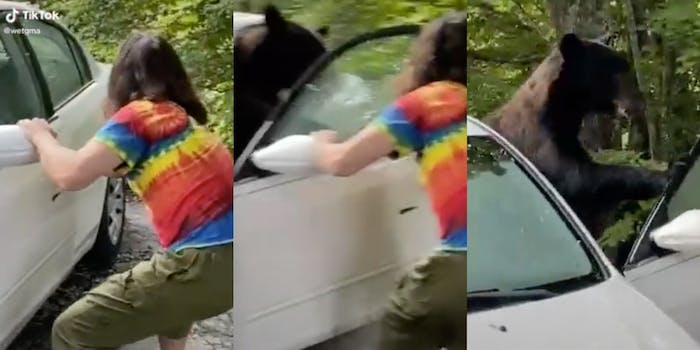 Video: Man scares away bear that broke into his parked car

Most people wondered if insurance would cover the damages.

A viral TikTok video shows a man scaring away a bear that broke into his parked car in Gatlinburg, Tennessee, a noted black bear-filled area.

Posted by @wetgma and also to story-specific account @bear_inna_car, the video has 19.4 million views. It shows a man, Joseph Deel, in a tie-dye shirt and his friends around a car as he unlocks his car door, which seems to be simultaneously the smartest and dumbest thing they could’ve done.

As he pulls the door open, the bear’s head pops out. It looks surprised, as if it’s been disturbed. It gets out and runs away as the men make noises and raise their arms to make themselves look big.

The account features other brief videos of Deel answering various questions about the bear incident, including the location and how the black bear was smart enough to check door handles and let itself inside.

In another video, the not-your-average bear came back to check the door handles again.

Sadly, though, Deel says he had to temporarily abandon the car on the side of a highway due to the damage from the bear.

“The looters broke in and stole what I left there; they stole my car’s parts,” he said. “Just having something like that happen to you and going through your personal information, I mean I was already in a vulnerable situation. I was kicked by the bear, and they kicked me some more.”

The most recent video posted a couple of days ago shows a completely trashed car. Most people wondered if insurance would cover the damages.