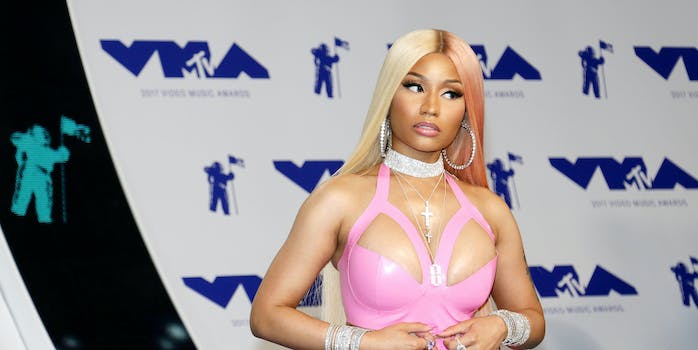 Nicki Minaj's 'Black Barbies' sparked debate around who it's for.

Black creators on TikTok are pushing to reclaim Nicki Minaj’s 2016 single “Black Barbies” from white creators who’ve co-opted it and boosted the sound.

Over the last week or so, several accounts attempted to break down the issue: The song “Black Barbies” is for Black women, and there have been calls for white creators lip-syncing it on TikTok to cease and desist.

“why are white ppl using this sound…” @barbie.jessiie wrote on TikTok last week.

The audio in question is from the account @bhadbhabierussia, which appears to be a “Russian fan account” for rapper Bhad Bhabie, aka Danielle Bregoli, who has previously been accused of blackfishing—when someone alters their skin and/or hair to appear Black.

The lyrics in the snippet of audio are “I’m a fucking Black Barbie/Pretty face, perfect body/Pink seats in the ‘Rari/Always fuck him like I’m sorry.” Some creators attempted to circumvent the idea that the song isn’t for them by only lip-syncing the part that “applies” to them, like “Pink seats in the ‘Rari.”

There were a few parodies of white women defending the use of the audio, but there were quite a few Black creators who didn’t see the issue, or said it’s “just a song.” There were also questions about whether Barbz—the name for Nicki Minaj’s massive fandom—are allowed the use the sound.

Creator @hiimgarnett points to other audio that was apparently co-opted and eventually filtered out the white creators at the very top. As @daydesiree and others pointed out, the issue isn’t that white people aren’t allowed to enjoy the song, but that there weren’t any “Black women at the top of this sound.”

Last year, Sheldon Pearce wrote about the “whitewashing” of Black music on TikTok, and how the app can quickly obscure origin and ownership when popular white creators become linked with a sound:

The idea of gentrifying a sound may seem odd, but it is less so when you think about TikTok as a space where sound is one of the greatest assets and how that asset is being mined to widen a gap between white poachers and Black originators, marginalizing those that it should be centering.

This is an issue not just for hip-hop, but also dance trends. Earlier this year, Addison Rae performed several popular TikTok dances on The Tonight Show, but drew criticism after failing to credit the Black creators who came up with them.

Some creators tried to come up with new lyrics for the song in the comment section of one TikTok, and “White Barbie” was created.

As of now, the top video under the sound is from a Black creator. Ironically, the line in “Black Barbies” just before the verse going around on TikTok is “New day, new money to be made/New things for them to imitate.”

It doesn’t appear Minaj has publicly addressed this trend yet.