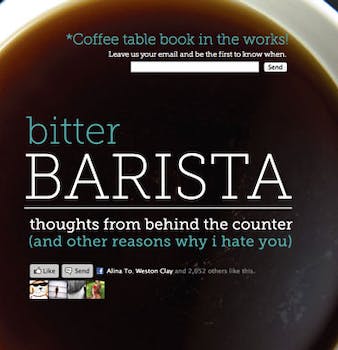 Matt Watson, 30, was fired from his job at All City Coffee after being outed as the "Bitter Barista" behind a satirical blog about his service-industry experiences.

It’s a wise idea to always be kind to your barista. You never know when your flippant, demanding attitude might inspire them to switch your decaf with regular or your two percent with whole milk. And in this day and age, you might end up reading about it online afterward.

Seattle Barista Matt Watson is out of a job after his boss discovered he’d been blogging as “The Bitter Barista,” giving voice to anonymous minimum wage espresso jockeys everywhere.

The blog was only launched a few weeks ago. Watson said a friend encouraged him to start it as a way of collecting his work-related tweets in one place. The site is full of stinging observations and cathartic hypotheticals:

“No, ma’am, I will not put four Splenda in your 20 oz. breve mocha, because that is f*cking stupid.”

“When I ask ‘for here or to go?’ I’m only curious what kind of cup you want … not what your plans for the day are.”

“Optimistic baristas are not to be trusted; good coffee requires just the right amount broken dreams and loneliness.”

These and other comments are often cruel and biting, but Watson insist it’s all satire and that none of it reflects real things he said or actions he took while on the job.

“(I’m) definitely learning a lot about how clear and explicit you have to be when you’re posting satirical content on the internet,” he told The Daily Dot. “I had always thought it was pretty clear, but apparently that is very much not the case.”

At least it wasn’t clear to writers at Sprudge.com, a Portland-based site about coffee and coffee culture. Writers there quickly connected Watson to his Bitter Barista blog through his twitter account, @spekulation.

Sprudge writer Llewellyn Sinclair said there is plenty of humor to be found when your job involves brewing espresso for sometimes self-centered customers, but that Watson’s was a bit over the line.

“There’s a lot of anger in this blog, and while we love the well-worn barista cliche, it should be the stuff of mild parody, not an all-out assault on whomever walks through the door of your cafe,” Sinclair wrote.

In addition to criticizing Watson, the site confirmed his place of employment as All City Coffee and linked to the coffee shop’s Yelp page. After reading the Sprudge article, Watson came clean to his longtime boss and tried to explain the humor of his blog. But his boss didn’t find it funny and fired him on Friday—a decision Watson says he thoroughly understands.

“I represent the business, the customers and the staff,” Watson’s former boss Seth Levy told the Seattle Times. “I can’t endorse what he was saying, whether humorous or not. It puts me in a difficult position, where if I don’t respond that means I endorse what he’s saying.

Although the loss of his job has been difficult, Watson said he doesn’t regret starting the blog. In fact, it’s still up and running, with a new opening screen that asks visitors to confirm that they “understand what satire is” and “have a f*cking sense of humor” before clicking through.

“At its best, I think the site really just gave more of a public voice to the conversations that go on between workers in the service industry every day,” Watson said. “Being a barista isn’t a grueling job, but it can still be emotionally exhausting at times, and I always felt like humor and creative expression were the best way to go about venting the frustrations that we all feel.”