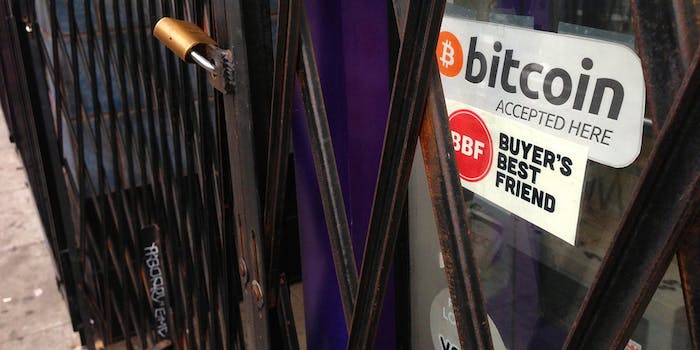 U.S. gets first ‘Bitcoin Boulevard’ in a Cleveland suburb

Drive east from downtown Cleveland for about 10 minutes into an unassuming suburb called Cleveland Heights. At the intersection of Cedar and Lee, that’s where you’ll find Bitcoin Boulevard U.S.

It sounds like a high-tech, brightly lit promenade, paved with sleek neon blue and green bricks inscribed with ones and zeroes. But Bitcoin Boulevard U.S. is basically just eight brick-and-mortar merchants on the same block that decided to start accepting Bitcoin at the same time: Thursday.

Big deal, right? A few businesses are trying to capitalize on Bitcoin’s recent spike in popularity in attempt to gain publicity and boost sales.

Aside from the fact that these businesses are acting like businesses are supposed to act, Bitcoin Boulevard U.S. is significant because it highlights that, despite Bitcoin’s recent spike in popularity, the digital currency is still not really a viable method of payment. Even in San Francisco and New York, you’d be hard pressed to find eight stores on the same block that accept Bitcoin.

In this Midwestern suburb, however, anyone with a digital wallet full of the cryptocurrency can walk into a store and buy “hand-crafted ice cream” and “impossibly-good fries,” fine chocolates, a haircut, eco-friendly clothing, and more.

“Our city has long been a very creative community,” Nikhil Chand, the project’s organizer, told the Daily Dot.

Even so, Chand, who has worked as a systems administrator for more than a decade, had a hard time getting local businesses on board with the project. He began cold calling last year. Initially, only one responded—a wine and craft beer store called the Wine Spot.

Chand helped set the business up to accept Bitcoin payments in February of this year, and almost immediately, he said, local news outlets took notice.

“It was a very positive experience for the Wine Spot,” Chand said, though he added that “there was no windfall of Bitcoin payments.”

With a leg to stand on, Chand looked to expand the project, and other vendors were suddenly more willing to get involved. Coincidentally, a similar project was underway in the Netherlands, where a group of businesses unveiled their own Bitcoin Boulevard in March.

“It has been astronomical, the amount of attention we’ve got out of it,” Chand said. “We got a positive response from both the press and the community. It switched from, ‘Are you crazy?’ to ‘This is awesome.’”

The Ohio Department of Public Safety is one group that hasn’t exactly been supportive of Bitcoin Boulevard. In anticipation of the project, the agency decided that, within Ohio, people can’t use Bitcoin to purchase alcohol.

The ruling has caused several of the merchants involved in the project to consider backing out for fear of losing their state-issued liquor licenses. As of the eve of the project’s launch, Chand said he was still waiting for further guidance from the state as to whether these vendors could accept Bitcoin for non-alcohol items they sell.

“This is all part of the Bitcoin atmosphere and required groundwork that is going to need to happen if Bitcoin wants to see adoption not only nationwide but worldwide,” he said.

Going forward, Chand said more businesses have inquired about getting involved in the project. He said he wants to continue to build it in other ways, such as adding infrastructure like Bitcoin ATMs.

So Bitcoin users, if your digital currency is burning a hole in your virtual pocket, head to high-tech Cleveland Heights and shop ’til you drop.