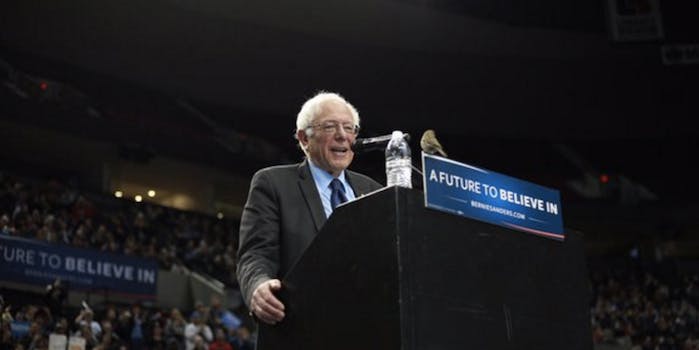 Put a Bern on it.

Sen. Bernie Sanders (I-Vt.) got an unexpected endorsement at his rally in Portland, Oregon, on Friday—from a small, adorable bird.

The Democratic presidential hopeful appeared to notice the feathered fellow near his feet on the stage, as did a very tickled crowd. But the bird kicked this bit of political theater up a notch by then leaping onto Sanders’s podium, at which point the audience went wild.

A bird lands on @BernieSanders podium in Portland Oregon. "Symbolism," he calls it. #FeelTheBern #BernieInPDX pic.twitter.com/Bt5a6y1FCC

People flip out over bird joining Bernie at the lectern. pic.twitter.com/KKptU17mDF

“I think that maybe there may be some symbolism here,” Sanders said, according to Politico. “I know it doesn’t look like it but that bird is really a dove asking us for world peace.” (Or maybe it had presidential ambitions of its own?)

In any event, the hashtag #BirdieSanders—and related memes—weren’t far behind.

#BirdieSanders and I are on our way to our rally in Seattle at Safeco Field. Meet us there: https://t.co/eJGkfGsA5M pic.twitter.com/05LhBpMrne

#BirdieSanders came to deliver a simple message in addition to endorsing #BernieSandersForPresident2016
Here it is! pic.twitter.com/ue8kcm2QKu

Right now, HRC is some where yelling at her staff "SOMEONE MAKE A GOD DAMN BIRD FLY TO ME" #BirdieSanders pic.twitter.com/qXnzFlAByk

What a beautiful moment. #BirdieSanders endorses @BernieSanders as the best chance to save our planet #FeelTheBird pic.twitter.com/stQEhOGg46

It took a bird landing on his podium for media to realize Bernie Sanders is still in the race. #BirdieSanders

Sanders isn’t the most hawkish candidate on national security, but if nothing else, he has the support of the Air Force.