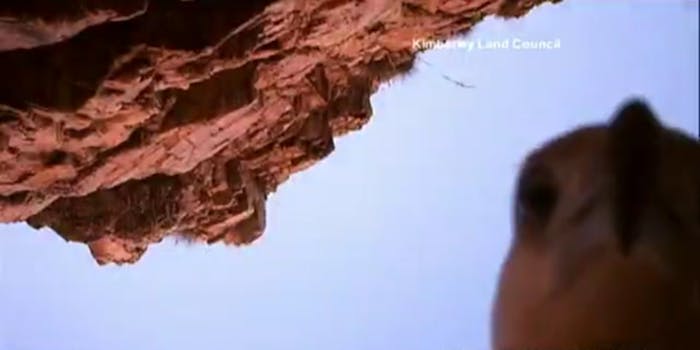 This bird selfie puts all human selfies to shame

You haven't seen a selfie until you've seen a sea eagle selfie.

Selfies were everywhere this year, but you’d be foolish to think only human beings indulge. Animals are into selfies too, and they’ll steal a camera just to document their existence.

At least that’s what happened recently in Australia. Back in May, rangers in Western Australia’s Kimberley region placed a motion-sensor camera near the Margaret River, in an effort to take photos of crocodiles. After it disappeared, the rangers figured it might have fallen in the water, as it wasn’t bolted down to any surface. According to WPTV:

“The rangers recently found out that the device had been found near the Mary River, about 110 kilometers (70 miles) away, ranger Roneil Skeen told the Australian Broadcasting Corp. When they examined the video inside, the real culprit was revealed.”

And that culprit was a sea eagle, who can be seen in the newly released footage taking off with the camera, flying roughly 70 miles, then dropping the device. After a few seconds, the bird comes into view, and takes a few selfies in front of a majestic backdrop. Cool filter. Is that Earlybird?

Thank goodness it’s not doing duckface, but damn, the composition is really good. Still, let’s add this bird’s antics to the list of criminal selfies.