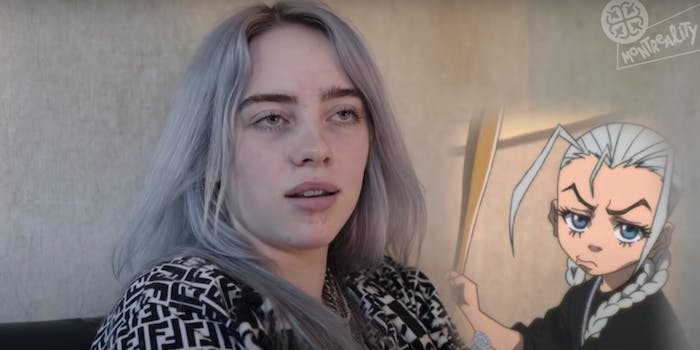 ‘We told y’all she was a culture vulture.'

Billie Eilish is once again facing scrutiny for a resurfaced video, this time for a 2018 interview in which she reveals her favorite cartoon character.

The clip was posted to Twitter last week and is from a longer interview with music site Montreality. When asked about her favorite cartoon character in one segment, she says it’s Cindy from The Boondocks.

“That’s me if I just did all the things I thought about doing,” Eilish says. “If I didn’t have good judgement.” She goes on to cite a few of her favorite Cindy moments from the Adult Swim series, adding that the character is “Fire.”

The Boondocks is known for satirizing Black culture and stereotypes, but in the minor character of Cindy, the show satirized white girls who dress and act Black. And Eilish has been accused of cultural appropriation in the past.

While some said this was just another example of appropriation, others didn’t see why liking a cartoon character was such a big deal.

Less than a month ago, Eilish apologized for a 5-year-old video in which she apparently mouthed an anti-Asian slur. She was also accused of using a “blaccent.” She has not yet responded to this most recent callout.

An HBO Max reboot of The Boondocks, with original creator Aaron McGruder, is reportedly set for 2022.