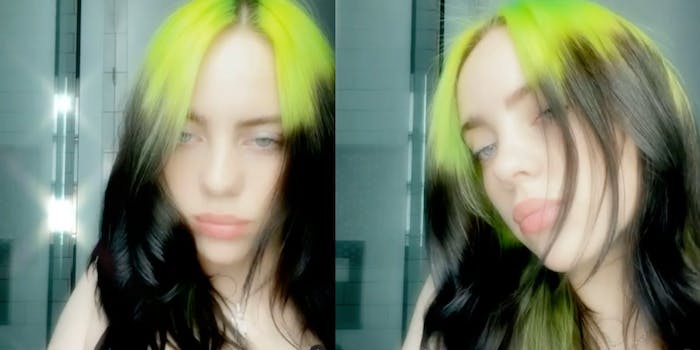 Did Billie Eilish really lose 100,000 followers on Instagram for posting drawings of boobs and butts to main?

As detailed by Pop Crave, the singer posted some of her art to Instagram Stories on Monday—a response to a prompt to “post a picture of a drawing you’re really proud of.” Eilish posted sketches of breasts and buttocks with the caption, “these probably lol i love boobs.” There was also a snake.

In another story, she posted a picture of her lock screen, a painting of two nude women.

One account, @sneezeandpepsi, posted screenshots of Eilish’s follower count in the wake of the posts. Eilish posted that tweet on her Instagram Stories with the caption, “LMFAOOO y’all babies smh.” (She does have some young fans.)

Another post about her recent browsing history showed Eilish spent some time looking at Tom Hardy, though that also led to some jokes in the wake of “lol i love boobs.”

Some accounts claimed she lost 100,000 followers, while others said 10,000. Eilish still has more than 70 million followers, and as of Tuesday afternoon, her follower count has only gone up.