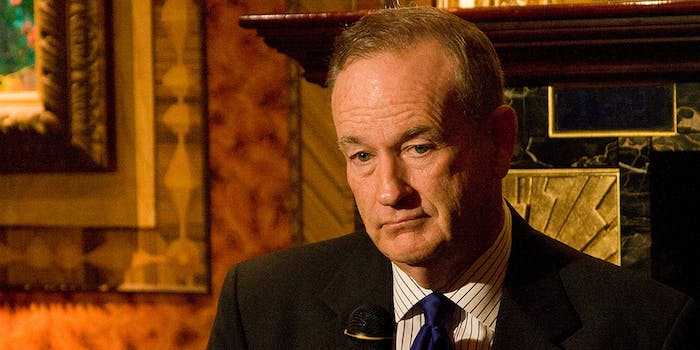 Is the No Spin Zone actually rife with spin?

Fox News host Bill O’Reilly is facing accusations similar to those that recently forced celebrity anchor Brian Williams from his desk at NBC.

In an article published by Mother Jones late Thursday afternoon, reporters David Corn and Daniel Schulman accused O’Reilly of fabricating his experiences during the 1980s as a war correspondent in South and Central America.

O’Reilly has frequently touted his own reporting during the Falklands war to emphasize the difference between himself and journalists who’ve never worked a conflict zone. In one tale, he drags an injured South American cameraman to safety during a violent street riot in Buenos Aires, only to be threatened by Argentine soldier bearing an assault rifle. As Mother Jones reports, O’Reilly has often referred to this as happening within a “war zone.”

As Corn and Schulman point out, however, the protest to which O’Reilly refers was far from the conflict on British controlled islands in the South Atlantic—more than a thousands miles away, in fact. The article also points out that O’Reilly has said repeatedly that he served as a correspondent for CBS News “in the Falklands.” According to Bob Schieffer, who was the network’s lead correspondent during the conflict, “Nobody from CBS got to the Falklands. … It was impossible.”

During a radio show in 2005, O’Reilly reportedly told a caller: “I was in the middle of a couple of firefights in South and Central America.” In his book, The No Spin Zone, he recalls visiting the El Salvador’s Morazan province during the country’s civil war after CBS hired him in 1981. There he reached a village in an area allegedly controlled by the guerillas. “But even though the carnage was obviously recent, we saw no one live or dead,” he wrote.

Mother Jones challenges O’Reilly’s version of the El Salvador story, using CBS footage as ammunition. “His own footage, which was recently posted by The Nation, showed residents walking about and only one or two burned-down structures,” Corn and Schulman wrote. “O’Reilly’s CBS report gave no indication that he had experienced any combat on this assignment in El Salvador.”

O’Reilly responded to the Mother Jones piece on Thursday evening calling it a “piece of garbage” and Corn “a liar.” He told Politico: “It’s a hit piece. Everything I said about what I reported in South and Central America is true. Everything.”

“I was not on the Falkland Islands and I never said I was,” O’Reilly continued. “I was in Buenos Aires. In Buenos Aires we were in a combat situation after the Argentines surrendered.”

Corn later fired back, highlighting to Politico the fact that O’Reilly has referred to his time as a in Buenos Aires as reporting from a war zone. “He said he was in the war zone during the Falkland Island conflicts—the conflict was in the Falkland Islands, it was not in Buenos Aires,” Corn said. “He covered a protest after the war was over in Buenos Aires. I don’t think that’s a reasonable definition of a combat situation. If you look up ‘combat situation’ in the dictionary, it’s not ‘an ugly protest’.”

“Rather than calling anyone a liar or a guttersnipe, he had ample opportunity to deal with the facts of this case,” Corn added. “He elected not to, and instead engaged in name calling.”

Photo via justinhoch/Flickr (CC BY 2.0)