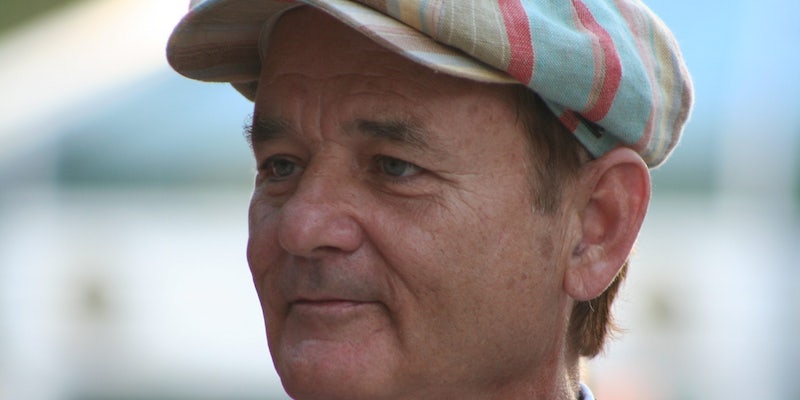 Why the Internet is obsessed with Bill Murray

Bill Murray retains an air of the mysterious, the quixotic, and the unexpected, and maybe that explains our enduring fascination with him.

A generation ago, people went to the movies for an escape. The tradition began when movies got us through the Great Depression. Cinema was the spectacle that could distract anyone from everything. It stayed that way for decades. Nowadays, we have celebrity culture. We cut out the middle-man, so to speak.

The day-to-day lives of celebrities suffice to provide an escape of what-if fantasies, and updates in their daily-developing soap opera narratives, ones perfect for our online consumption. We hunger for the crises and climaxes of love stories. We want to feel the relentless and curious twists of life, and all its bittersweetness. Only now, celebrities deliver it to us directly. Walking amongst the bold and the beautiful people, doing his own thing in that celebrity landscape, is a man who needs no introduction wherever he goes, because, oh, that’s right, he’s Bill Muthafuckin’ Murray.

He’s not avuncular, that word’s too dry, too scholastic; no, he’s everyone’s favorite pretend uncle. Maybe he’s the funny-and-sweet father-in-law you hope to call your own. Or, more likely, he’s the curious stranger you meet one day, if only for a moment, and he changes your life. Imagining that scenario, Sofia Coppola showed the world what we’d all overlooked for far too long: Bill Murray is a hell of an actor. You can feel him in silence. You’re moved by his stillness. Sofia Coppola nailed his appeal when she cast him in Lost in Translation. She’s said in multiple interviews that it was always Bill, or no one else. That’s how it is with Bill Murray. None else compares.

But of all the many famous people we’re unfairly blessed with, why is Bill Murray always up in your News Feed? Nary a week passes without mention of him. How can that be?

Right now, he’s promoting his new movie, St. Vincent. It’s October—when a dramatic movie gets released in October that means it’s a likely awards-contender. This particular film has a ton of Oscar buzz after its premiere at the Toronto International Film Festival. And now that it’s a Harvey Weinstein-backed movie, it’s gonna get a big push of awards season publicity. Get ready to see a whole lot more Bill Murray in the coming months as awards season builds to a frothing boil. The big awards will be handed out in March. Yet, one can assume that away from the clattering noise of that Hollywood buzz machine, Bill Murray will remain an Internet news-story machine, week in and week out, all by himself.

What is this ineffable quality that Billy Murray has? It transcends typical stardom.

If, like him, you grew up Catholic and went to a Jesuit high school, you might instantly recognize his appeal. Bill Murray is the Internet’s Holy Fool.

In the sixth century, there was a man by the name of Simeon the Holy Fool. He wandered the desert for 29 years, and then, one day, he heard the voice of God tell him to return to the city. But the dude didn’t want to go back to town and be recognized as a holy man. So, Simeon tied a leash around his waist, dragging a dead dog behind him. That’s how he returned to town. Of course, it worked. No one peered beneath that ugly surface.

Yo, have you met that dude Simeon?

At first, the townspeople didn’t know what to make of him, but soon enough, word spread of his countless secret acts of charity and kindness. People recognized he was a pure soul. This was not easy to see, because Simeon was purposefully strange. For years, Simeon hid his acts of saintliness behind a mask of madness. Now, he’s the patron saint of fools, puppeteers, and ventriloquists.

To give a sense of his antics, St. Simeon once broke in and disturbed a church service, then threw nuts at the female parishioners. He would often gorge himself on meat, eating it in the public market on holy fast days. He would tell children which of them would survive illness and which would die.There’s a famous story of him taking off all his clothes, walking the streets until he reached the bathhouse, but then avoiding the men’s section and proceeding to use the women’s bathhouse. When confronted about what he’d done, he said: “You idiot, there is hot and cold water in both bathhouses.They are no different.” Despite his affronts to polite society and social norms, St. Simeon is credited with vastly improving the spirit of the city.

This is the function of the Holy Fool. Their inherent goodness can’t be tarnished, no matter how obscene they may appear. People said of Simeon the Holy Fool that he is “like a pearl which has traveled through slime unsullied.” The holy fool is shameless. Their lack of shame advertises their blessedness. Or as Bill Murray recommends: “If you’re relaxed, you do better.”

In his best movie roles, the iconic parts we all quote, the irreverent holy fool that we know as Bill Murray is perfectly evident. It’s that quality you can never put your finger on. Yet, it’s always there. We all seem to agree that no one likes a try-hard. That’s his charm: Bill Murray never looks he’s trying. He always appears effortless. He’s just doing what he does. And if that happens to upset society, so be it.

Consider the essential nature of his characters from some of his most beloved roles/films:

Groundhog Day: A man living one day of his life, over and over, and over again, like a Buddhist stuck in the karmic wheel of samsara.

Ghostbusters: A fallen man of science battling against forces of ancient evil.

Scrooged: A materialistic man faced with a multi-dimensional mid-life crisis of the spirit.

The Life Aquatic with Steve Zissou: An aging cult leader leveraging the power of belief.

What About Bob: Holy Fool.

The Man Who Knew Too Little: Holy Fool.

Kingpin: (An exception to the rule).

This could be the motto of Bill Murray’s filmography.

Growing up watching his movies we tend to sense this inherent, irreverent goodness in him. Right away, we’re in on the joke. And that makes us feel cool as kids. He’s like an introduction to paradox. We sense that his bad behavior has nothing to do with his goodness. It’s always there, just beneath the surface, detectable like a pulse. In childhood, we bond with Bill; much like how we attach meaning to comfort foods, subconsciously associating them with happier, simpler times. The Internet is now a testament to our ever-growing Cult of Bill Murray and pizza.

But can you blame us? The man shows up anywhere, everywhere, always a surprise, always wise, always fun, and the ones who are there when Bill rolls through share that moment with him, and then tell the rest of us stories that no one would believe. Bill Murray, reportedly, tells strangers he meets: “No one will ever believe you.” And he’s right. It’s like saying that while you were bowling, you met the Pope in the pisser.

But there are countless stories. It doesn’t matter where you are, Bill Murray might show up. Which, if you think about it, also gives him a supernatural power. In the same way Jesus may show up on your potato chips, Bill Murray may show up at your beer festival. It’s kind of otherworldly.This magical freedom of being Bill Murray comes from a very deep place.

He recently showed up on Howard Stern’s radio show. This is rare. Even though his Reddit AMA was the most popular ever, he’s famous for being very interview-averse. As with his time with Charlie Rose, it was a rare chance to hear him open up. After an hour with Howard Stern, Bill got very personal. He talked about loneliness, and maybe someday having a date for things like George Clooney’s wedding, which he’d recently attended and, at which, he gave a very moving toast, according to all reports.

In the interview, Howard asked: “Are you a happy man?”

Later, Howard asked: “Are you lonely?”

Bill took a pause to think. “I don’t think I’m lonely. It’d be nice to have someone to go to some of these things and have a date—have someone to bring along y’know.”

Howard followed up: “You went solo to Clooney’s wedding?”

A little later, Bill Murray talked about his work on self development and ‘“becoming more of a person.” Howard Stern assumed he meant being “more connected to people.”

Howard asked about his love life: “So where is the great love? Certainly, you can get women.”

Bill explained: “I have to do this other thing. If I’m not really committing myself really well to that, then it’s better that I don’t have another person.”

This awareness of his own ugliness speaks right to the charm of Bill Murray. What better time to laugh than when you’re standing in shit?

The Holy Fool uses the profane, the gross, the ugly and impure, the ignorant, and the socially offensive to show the sanctity of life, the value of love, and the restorative power of laughter. Bill Murray dances across the landscape of celebrity, acting a fool, dressed like a clown, as he throws nuts at women in church—no, wait, that last part’s not him. But underneath everything he does, Bill Murray has a need to connect, a palpably present sense of love for strangers, and he uses laughter to lift spirits and morality, even on the Internet.

Bill Murray doesn’t live in our take-your-phone-to-bed modern times. He lives the way many of us secretly wish to, untethered and free. He’s loved, he’s admired, he’s rich, he chases fun, and he shares joy with the people he likes and enjoys; and maybe, he crashes a kickball game in the middle of the day, in a NYC park. Because why not? Bill Murray is positively anti-tech, anti-authority, and anti-bullshit.

He’s a world-famous movie star who has no agent or manager. Wherever he goes, he owns the moment. He knows that’s all there is. He reminds us of this great truth. Bill Murray seems unconcerned with the future. This renders him practically fearless. It also means he’s, practically, free. Yet, like so many of his fans, he’d like to meet someone special. Bill Murray leans optimistically forward toward the unknown, and he does it with a laugh. He’s our patron saint of irreverent cool. And the Internet’s own Holy Fool.