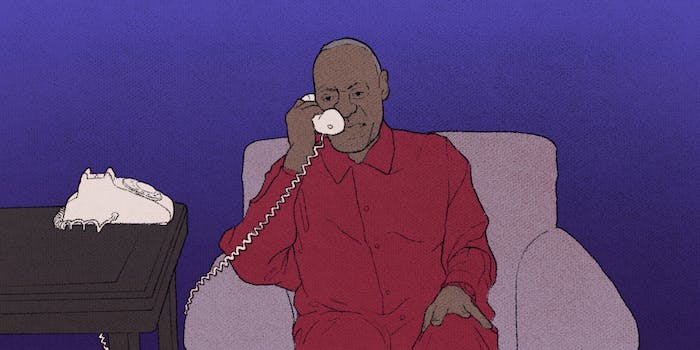 Why you should think twice before sharing those Bill Cosby memes

A rape joke is still a rape joke.

Now that a recently unsealed 2005 deposition revealed that Bill Cosby indeed admitted to drugging women for nonconsensual sex (read: sexual assault), the conversation about Cosby’s allegations has resurfaced in the unsavoriest of ways. Although some previous Cosby defenders such as R&B songstress Jill Scott have offered mea culpas in their own way, others including The View’s Whoopi Goldberg still stick by the “innocent until proven guilty in a court of law” argument, even though Cosby put himself on blast in an actual court document.

But almost as bad as people defending the man previously known as “America’s Dad,” are the resurgent memes that make light of the situation. Here are but a few examples:

The #CosbyMeme, as the Daily Dot’s Miles Klee rounded up last November, was borne of a social media disaster via Cosby’s PR team. In a now-deleted tweet, users were asked to submit a memes via BillCosby.com, an ill-advised request at the height of a media fiasco about the resurgent allegations—one that followed comedian Hannibal Buress’s reference to the open secret about Cosby’s wrongdoing. And as the controversy intensified, more and more women spoke up with stories of their own, with more than 25 women in a 40-year timespan alleging Cosby sexually assaulted them.

But as CNN political contributor Sally Kohn recently noted, the fact that almost half of Americans (as of last January) didn’t believe the women who made allegations, despite the sheer volume of claims and the common narrative of drugging, was indeed rape culture at work: “[T]hat dozens of women reporting similar experiences was not enough to conclusively condemn Cosby precisely reinforced the ‘no one will believe you if you tell anyone’ threat that keeps victims silent.”

The memes, in themselves, are part of this troubling dynamic, one in which a survivor must constantly contemplate how others will react if they share a story of experiencing sexual assault. Survivors must often wonder whether or not they’ll be called liars, “attention whores,” or become punchlines for quips about rape. Indeed, some of the memes satirically critique the nature of Cosby’s celebrity status, and how apologists’ arguments completely miss the point (and, of course, not all satire, regardless of the severity of the situation, is created equal). But many others make Cosby’s alleged survivors the focus of the joke.

No survivor deserves this kind of treatment, not the women who have come forward saying that Cosby sexually assaulted them, nor any others. And for survivors who see the Cosby rape memes circulating again in the wake of the unsealed deposition, the jokes may very well reopen old wounds—wounds that took years of therapy, reflection, familial support, and even prayer, to heal over.

As a survivor of sexual assault myself, the sight of the Cosby memes made me hearken back to when I narrowly escaped an attack during my adolescence. For years, I was scared to ever say a word, because I thought I’d be subject to having my experience minimized by homophobic stigma, or because I thought I’d be mocked and ridiculed for having been violated in such a terrible way. I can’t help but look at memes of Cosby, a man who we now know drugged at least one woman for nonconsensual sex, with words like “Pudding popped right in her pussy” and think to myself: How on Earth could anyone who knows a survivor find this funny?

As Lindy West wrote at Jezebel, during the controversy over Daniel Tosh’s rape joke in 2012, it is indeed possible to include the subject matter of sexual assault in satire, but it’s the approach and positioning that matters.

How on earth could anyone who knows a survivor find this funny?

“[T]he best comics use their art to call bullshit on those terrible parts of life and make them better, not worse. The key—unless you want to be called a garbage-flavored dick on the internet by me and other humans with souls and brains—is to be a responsible person when you construct your jokes.” West wrote, citing at least four potential examples of how it could possibly be done. “Nobody is saying that you can’t talk about rape. Just be a f*cking decent person about it or relinquish the moral high ground and be okay with making the world worse.”

It’s important to remember that every survivor’s experience is different, and that each person is on their own journey of coping, including the women Cosby allegedly harmed. A joke translates differently to different audiences, based on the subject matter of the joke and the people they’re based on. By engendering a culture where a rape joke, with a survivor as the punchline, is deemed OK, we’re reinforcing a system where sexual assault is normalized.

And that is no laughing matter.