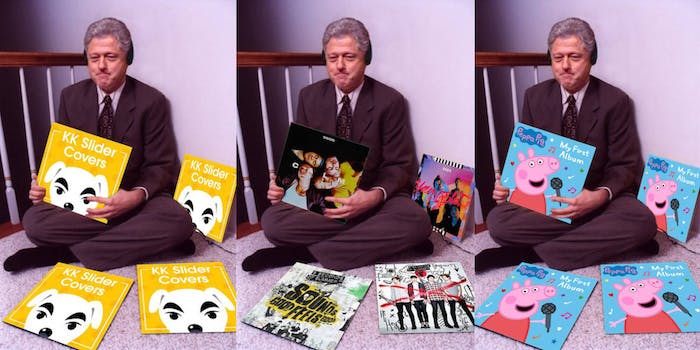 Some were annoyed that the meme uses a picture of the former president.

Some truly strange internet challenges are coming out of the international quarantines. The latest is sharing favorite albums using a meme of former President Bill Clinton.

From putting on and taking off articles of clothing while doing a handstand to styling a pillow and belt as an outfit, people are coming up with interesting ways to pass the time. People participating in the newest challenge are showing off their favorite tunes using a picture of the former president.

The trend has drawn a variety of reactions. Some people were excited to share their taste in music, and others were disappointed that the meme featured Clinton.

“If I ever release any type of music, I swear to God–I better not see Bill Clinton holding the album cover,” one Twitter user wrote.

Others are coming up with their own alternative to Clinton—themselves.

The careful creation of this meme perplexed some online until they learned a website creates the image after you select the albums.

“Was so confused how everyone was perfectly photoshopping album covers into Bill Clinton’s hand before I was informed it is in fact a website that does it for you,” Twitter user @devbryce15 wrote about the meme.

While some were unhappy about the choice of president, many seemed pleased to get the chance to share their taste in music.

“Bill Clinton album challenge. I don’t care what you think, Fall Out Boy are some real ones (yes, that was a pun on one of their songs),” Twitter user @stoicfervor wrote.