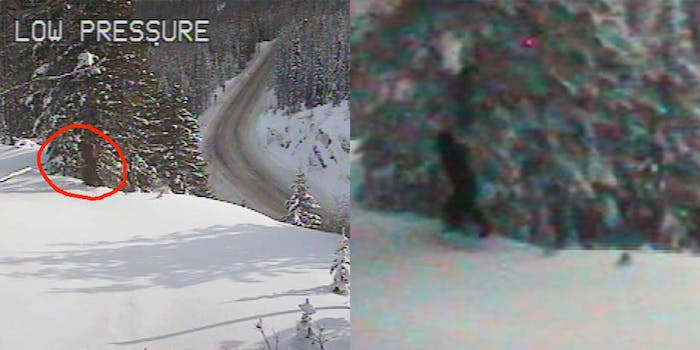 Washington's transportation department says it caught the cryptid on camera.

There’s a new claim of Bigfoot proof, and this time, it’s on webcam. The Oregonian first reported that Washington state’s Department of Transportation (WSDOT) caught the supposed cryptid on Ferry County’s Sherman Pass.

It’s clear where WSDOT stands on the footage: It posted a photo with the caption “Sasquatch spotted!!!” Yes, three exclamation points.

Sasquatch spotted!!! I'm not superstitious… just a little stitious. Have you noticed something strange on our Sherman Pass/SR 20 webcam before? If you look closely by the tree on the left there looks to be something… might be Sasquatch… We will leave that up to you! pic.twitter.com/RaDGqQdEUF

Ryan Overton with the WSDOT said he was responsible for tweeting the images and that it’s not the first time something strange has appeared on the department’s camera.

“We have had a blow up inflatable alien that moved around in front of the camera,” Overton told the Daily Dot. “We have also had a Christmas tree that lit up during the winter months and now we have what appears to be bigfoot.”

People on Twitter seem to care about this—at least a little bit. According to social media analytics tracker SocialBlade, the account gained 173 followers on Thursday. And plenty of users have been interacting with the account, which is… wading into conspiracy theories.

Huh… Sasquatch and now this. I really don’t have an explanation for this one. Anyone? Thoughts? https://t.co/gtNBYnAgCP

Some, like Twitter user @gabegarcia, are skeptical. “Notice that more snow fell on the ground and roadway in each pic. Why is there is no snow on the all black ‘Sasquatch?’” Garcia said. “At least sprinkle some fake snow on his black fur next time.”

Photoshop!!! Notice that more snow fell on the ground and roadway in each pic. Why is there is no snow on the all black “Sasquatch”? At least sprinkle some fake snow on his black fur next time.

Overton clarified to the Daily Dot that his tweet was “meant to be a joke” but does believe a stationary object was placed near the tree in the webcam footage.

“If you look at the current image (as long as its not too dark yet) you may be able to see it for yourself because it never moves,” Overton said. “But someone did put something up there, I just haven’t seen it for my own eyes.”

Update 12:30pm CT, Jan. 28: Ryan Overton told the Daily Dot that in the 24 hours after the “Bigfoot” tweet was shared, the Washington State Department of Transportation gained over 500 followers.