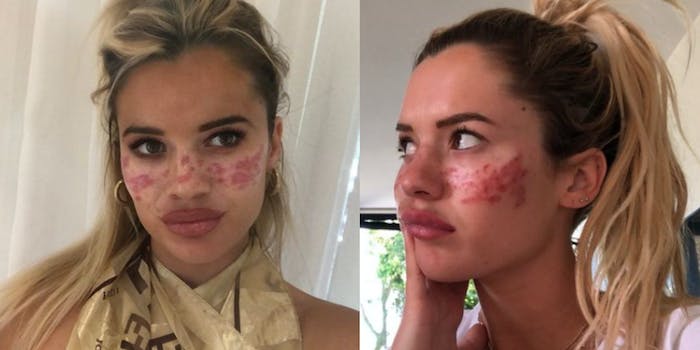 'I literally shoved needles deep into my skin.'

Australian Big Brother contestant Tilly Whitfeld is warning against the dangers of attempting viral DIY beauty hacks after her own attempt left her with persisting health issues.

Whitfeld’s attempt to replicate the TikTok faux freckle hack, which attempts to teach users how to give themselves semi-permanent fake freckles, resulted in thousands of dollars in medical expenses. Short-term faux freckles are typically created using anything from henna to lip liners or eyebrow pencils, but some TikTokers sought a more long-term solution. This lead to the reveal of a TikTok hack that would supposedly provide users with up to six months of faux freckles, but instead left Whitfeld with extensive facial scarring and temporary vision loss.

The faux freckle hack has participants use a sewing needle to jab a small amount of ink beneath the skin of the face. The resulting spots, which mimic freckles when done right, supposedly fade within six months. Whitfeld, uncertain of what kind of ink to get, located and purchased brown tattoo ink from eBay. Unfortunately, as she would later learn, the ink was a counterfeit product containing “high levels of lead,” according to a June 15 interview with the New York Times.

Whitfeld revealed in May that a TikTok beauty hack was the reason for her consistent use of a blue clay mask on Big Brother. She posted several photos of her face to Instagram, showing numerous angry red scars sprinkled across her cheeks and nose, but she did not reveal the beauty hack she’d been attempting. In the post, she warned people to avoid “DIY or at home beauty procedures” after her attempt landed her “in hospital with temporary loss of vision in my eye due to swelling.” She also noted that the attempt gave her an infection, and the combined scarring and swelling left her face “somewhat unrecognisable.”

She finally revealed that the freckle hack was behind her ill-advised attempt at DIY beauty when she spoke with the Times. Previously, she had simply referred to her attempt as a version of acupuncture, noting that she “literally shoved needles” deep into her skin.

“It didn’t hurt at all, so I didn’t think I should stop,” she said. She even went over each “freckle” multiple times, as advised in the video she was using for reference, to ensure that the ink took.

Whitfeld’s botched attempt at faux freckles cost her nearly $12,000 in doctor visits, as she works to repair the resulting scarring. While her face is looking much more healed these days, according to her recent posts to Instagram, she has yet to completely resolve the situation. Laser removal isn’t an option, despite recommendations from fans, due to doctor warnings that the ink she used will turn black rather than fade.

“The main response has been that I’m stupid, and, yeah, I agree,” she told the Times.

Whitfeld is still seeking a solution to her unfortunate attempt at the TikTok faux freckle hack, and doctors are citing her experience as a warning. Dr. Niket Sonpal, a gastroenterologist in New York, warned people to consult a doctor before attempting any beauty hacks they stumble across online.

“You have a lot of people claiming to be experts who have no real consequences for giving really bad advice,” Sonpal told the Times. “We can counsel and educate you for more than 60 seconds.”