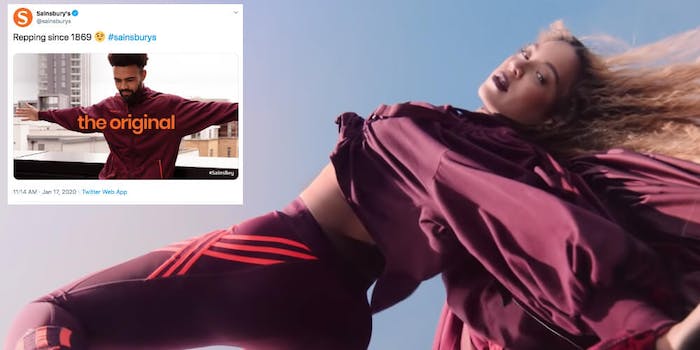 If there’s one thing we all know about the Beyhive, it’s that they’re always ready to put up a solid fight to defend Beyoncé against anyone and anything coming for her. And now, they’re locked in battle against Sainsbury’s, a U.K.-based supermarket chain that dared poke fun at Queen B over similarities between her new adidas x IVY PARK collection and its own iconic supermarket uniforms.

These happen to be the same colors Sainsbury’s has been using for its brand for a very, very long time, prompting whoever runs the chain’s social media to joke that it is basically the original adidas x IVY PARK.

“Repping since 1869,” the official Sainsbury’s Twitter account posted after Bey’s clothing line dropped, alongside a photo of its uniform and the hashtag #SainsBey.

The tweet immediately polarized fans and casual onlookers alike, with some members of the Beyhive taking the silly potshot at their queen to heart, and jumping to her defense.

We made it famous though!! Karen

Another stan somehow spun the negative tweet into a positive one for Beyoncé.

“Since 1869 and Beyoncé did it better in less than year,” Twitter @CORNYASSBITCH wrote.

And some just decided to straight-up attack the supermarket chain, diving deep into stock prices and quarterly sales reports.

“Not y’all trying to drag when your sales been falling for three quarters straight. Let’s talk about it,” Twitter user @taeyonce_b7 wrote.

Still, others jumped to Sainsbury’s defense because the world is chaotic and everything that happens on the internet is somehow just so intense.

“There are a LOT of crazy Americans going wild round these comments,” Twitter user @emilypaws wrote. “Evidence of British humour not quite being understood.”

I am loving all the weird Beyoncé fans picking fights with a UK supermarket because they made a pretty decent joke about their queen. I mean it literally looks like their uniforms. 😂😂 pic.twitter.com/2Ya7hv7bQY

But it’s overpriced uniforms basically? What she’s trying to sell? Yeah? No?

A woman who appears to be a Sainsbury’s employee even jumped into the fray, offering to be the face of the #SainsBey campaign.

But a lot of people recognized the whole thing for the super casual joke that it was and joined in on the fun. One user even hilariously Photoshopped a photo of Beyoncé wearing the adidas x IVY PARK line into a supermarket aisle.

clean up in aisle 24 pic.twitter.com/8xmVTGGxVg

“Beyoncé on tills: To the left, to the left. Everything you scan in the bag to your left,” Twitter @S11UJ joked, riffing off one of Bey’s hit songs, “Irreplaceable.”

Who run the tills?

Sainsbury’s social media team is taking the whole showdown in stride, continuing to engage with Bey’s fans in a very tongue-in-cheek manner.

“Our ‘irreplaceable’ team will be back at 7am to answer all your queries! Hope you all have a lovely weekend and ‘beehive’ yourselves!” a representative named Emma wrote.

Thanks for another great day everyone! Our "irreplaceable" team will be back at 7am to answer all your queries! Hope you all have a lovely weekend and "beehive" yourselves! Emma 💤