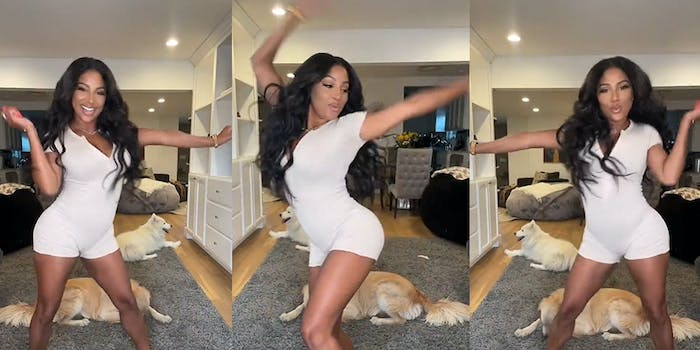 No, that’s not Toni Braxton dancing to Beyoncé’s new song

The woman in the video quickly debunked the claim.

On Monday night, Beyoncé released “Break My Soul,” the first song from her first solo album in years. And while that resulted in a plethora of memes and plenty of people wanting to get up and dance, Toni Braxton wasn’t one of them.

In a video that’s been viewed over 2.1 million times, a woman, with two dogs laying down behind her, starts lip-syncing to “Break My Soul” and starts to dance.

“Not Toni Braxton enjoying and dancing to Break My Soul! ❤️😍” @freakumchanel, who shared the now-viral video on Twitter, wrote.

The video doesn’t show Braxton dancing or lip-syncing along to Beyoncé’s newest song. It’s actually Candice Craig, a singer and dancer whose original video was first posted on Instagram.

“It’s giving Jazz dancer 101 😝😭,” she wrote. “who wanna do this one with me cause clearly the dogs are uninterested 😏”

Later in the thread, @freakumchanel posted a video of Kris Jenner lip-syncing to “Lady Marmalade,” a nod to Krissing, or a new variation on the art of rickrolling. In a reply linking to the same video, she said that “They got krissed so bad!”.

Craig soon identified herself as the woman in the video, and she was far from the only one debunking the claim that Braxton danced to Beyoncé; some included other videos of Craig dancing and mentioned her previous work.

Even though Craig and others debunked the claim pretty thoroughly—to the point where “Toni Braxton” trended on Twitter because of it—at least one person insisted to Craig herself that she was somebody else. Others had to be told that Craig was the woman in the video.

Eventually, Craig posted her video to Twitter, where her pinned tweet now asserts that while she loves Toni Braxton, she is not, in fact, Braxton.

“Y’all 🤣🤣🤣 I love me some Toni Braxton !” she wrote. “I do however LOVE being CANDICE CRAIG so stop with all the mess. Go check the resume and stay woke 😘😘”