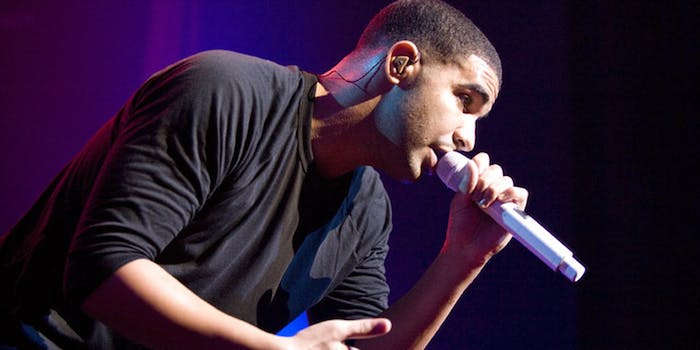 Drake lyrics you should (and shouldn’t) use on Tinder

Honestly, I haven’t spent much time on Tinder. I just moved to a new city, so it’s something fun to do when bored—but you quickly realize that everyone is as dull as you and that you’d rather just talk to your ex, because she’s the only one who will ever really get you and oh god, what if she’s on Tinder too and meeting guys who are exciting and dynamic while I’m just—

OK! Sorry about that. Anyway: I haven’t spent much time on Tinder, but in my limited experience I’ve noticed a trend that’s about as infuriating as it hilarious: people using Drake lyrics in their profiles.

Yes, the rapper who built a legacy on lint rollers and murmuring sad-boy flexes has, in some way, become the lingua franca by which young people meet and fuck. That’s totally predictable and totally outstanding. It proves to me that we, as people, never change on a fundamental level. I still remember high school, when a whole generation of kids took to MySpace to scorch “WHEN I WAS, A YOUNG BOY, MY FATHER, TOOK ME INTO THE CITY, TO SEE A MARCHING BAND” across profiles in some combination of legit pubescent emotional upheaval and feeble proof to the rest of the world that you watched MTV2. Putting Drake lyrics on Tinder isn’t much different. Even the end goals (“I hope some cute girl who likes My Chemical Romance sees my MySpace!) aren’t that different.

But, my friends, you should always be careful when trying to co-opt Drake lyrics into a hookup. It can be done well, and it can be done very, very poorly. So here are the four best (and four worst) examples I’ve seen.

“You used to call me on my cell phone…”

Not a bad choice, but maybe a little temperamental. “Hotline Bling” is inescapable right now so the dazed, lovelorn schmaltz totally works for a lot of the yearning involved in online dating. It is, however, a little vague, and pretty soon all the November babies might not even recognize it! I have no interest in a world where you can’t use the poutiest of pouty Drake lyrics to establish your initial sad-boy façade.

“I might be too strung out on compliments, overdosed on confidence”

This is really good if you want to reveal yourself to be a self-involved weirdo right off the bat. Drake here is talking about all the acclaim, fame, and attention following his successful debut; you’re drawing a parallel between that and, like, your parents being proud of you. That takes guts.

The best Drake lyrics combine ridiculous brags and concepts that don’t make actual physical sense. There’s no way Drake subsists off a 24-hour champagne diet, but it sure is fun to say! If you’re going to use a Drake quote, make sure you pick one that can never be misinterpreted as genuine.

“I’m here for a good time not a long time”

In some ways this infuriates me. A Drake quote has become the de facto code-phrase for casual sex. It’s the most millennial thing ever, but also perfect. Perhaps we owe it to Drake’s judo-grip on the tenor of the times; maybe we’re all just impressionable idiots. Either way, it’s incredible that we’ve all decided this is OK. You know what? It’s a pretty effective phrase! I’m not sure if I’m completely comfortable with making Drake a parameter-setter along the lines of Shakespeare or something. But I’ve got a feeling that we’ll be using “I’m here for a good time not a long time” for eons.

Here’s the thing. Drake was lying when he said that. You know why? Because Drake owns a ton of chains, but he’s always kept it pretty tasteful in public! Don’t get me wrong, it’s a great flex, but if Aubrey feels like he’s above it, maybe get it off your Tinder profile.

I am not entirely convinced that Drake knows what “gwanin’ wassy” means, but I am 100 percent sure that you, a marketing sophomore at Arizona State University, have absolutely no idea what it means.

This was already an awkward, semi-redundant line when Drake said it. Also you’re 22 years old and holding a fish. Are you trying to say you “stayed true” to the faux-outdoorsy, in-vogue masculinity that’s become the dominant way to communicate on online dating sites? I guess that works!

“I’m just saying you could do better, tell me have you heard that lately”

Number one with a bullet. I don’t think there is a worse lyric, regardless of author, to include in an online dating profile. Here’s my rule: If you’re sourcing your bio from the same song that includes the line “I’ve had sex four times this week: I’ll explain, having a hard time adjusting to fame” it’s probably not going to work. Drake is allowed to sport those humblebrags because he’s Drake and exists in an untethered fantasyland. Meanwhile, you work at State Farm. There’s a difference. Don’t fall into this trap.