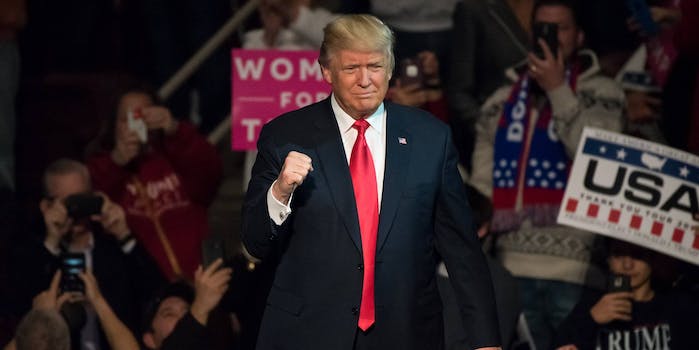 Sometimes Twitter can crash under the weight of its own redundancy. A big news story breaks, and users make the same joke over and over and over again.

We could have had just a million ‘PEE-OTUS’ jokes that everybody got sick of 10 minutes later. Instead, the site exploded with phenomenal puns, burns, and witty takes.

Stark contrast as Pres. Obama delivers this farewell address while Trump tweets about allegations he paid prostitutes to pee on a hotel bed.

♫ Then all the Russians loved him
And they shouted out with pee,
Donald the small hand facist
You'll go down in historee ♫#GoldenShowers

"If you're going through hell, keep going." – Winston Churchill

"The only thing to fear is fear itself."
-FDR

"Pee on my face"
-Donald Trump#GoldenShowers

Here's what the US electoral college map would look like if Trump were into it pic.twitter.com/W50HrngTp8

Turns out that hot mug of liberal tears you were sipping was something else entirely.

Very empowering for our girls to know that one day, if they dream & work hard, they can pee on the President of the United States.

What's the difference between a lentil and a chickpea?
Trump wouldn't pay $1000 to have a lentil on his face.#watersportsgate #goldenshower

The president-elect of America pays hookers to pee on one another for his amusement.
This isn't a joke.
Repeat, not a joke. #GoldenShowers

WHAT GETS AMERICA TO STAND AGAINST FASCISM

-FASCISM ITSELF: NO
-BLATANT BIGOTRY: NO
-MASSIVE CORRUPTION: NO
-PEE: WILL FIND OUT SOON

"We're going to pee in foreign hotel rooms and Russia is going to pay for it." – Donald Trump, probably. #GoldenShowers

So Trump supports PP after all

The hilarity of Watersportsgate is almost worth the election of an actual gang of traitors:#GoldenShowers https://t.co/nMrKBuQIUJ

OMG, what if the pee story *isn't* true and we're all defiling the good name of a pussy grabbing neo-Nazi Putin puppet conman!?!

Every single one of these tweets is absolutely a delight to read. Treasure them all.